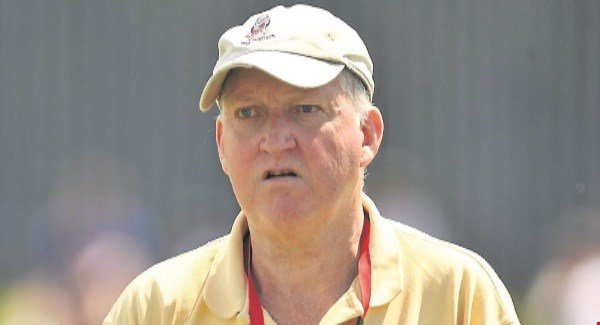 Dick Hodgins: ‘Between April & July, He’d Be On The Phone All Night.’

A few years ago Frank Walley and Dick Hodgins were in Amsterdam. Athletics business, as befits two stalwarts of the Cork City Sports. They were having coffee when a familiar face materialised in front of them.

“Hello Dick,” said Sebastian Coe, not quite at his present eminence but famous nonetheless. “How are you?”

Hodgins, who passed away on March 4, filled several roles with the Cork City Sports for years, including Meet Director and Chairman. The last few months have been hard going for athletics fans, with shocking revelations of drug-taking and cover-ups across the globe. Those developments showed just how valuable integrity is in the sport nowadays, and Hodgins was a by-word for integrity.

Walley worked alongside him for years, and this is about the time of year Hodgins came into his own, he says.

“Between April and July, he’d be on the phone all night. Ringing guys all over the world, in every time zone you could think of, trying to get athletes to come to Cork for the Sports.

“He was an excellent negotiator with these guys. It could be tricky, because you’re obviously dealing with a wide range of characters and personalities, but Dick always did well because when he agreed something with a guy, then there was no way he’d change after that. If an athlete didn’t perform, he wouldn’t be happy.

“You’re talking about 250 athletes from all over the world, remember. There might be 60-odd Irish athletes and then the rest would be from England, Australia, America, Europe,everywhere.

“Whatever Dick would negotiate, that would be it, but it meant he was dependable and had integrity. That counted for a lot in the world we were operating in.”

So did the successes they had which made headlines around the globe. It’s now part of Irish sporting folklore, but the warm evening back in 1984 that Russian Yuri Sedykh broke the world record for the hammer gave the Cork City Sports committee men plenty of headaches. Or rather, that morning did.

“We had to turn people away that time from the Sports,” says Walley. “Which was great in one way, but that morning we went up to check out the Mardyke, where the event was, and Sedykh was warming up. I’d say he broke the world record about six times while we were watching him. We had no worries he could do it again that night, but before he started we had to move the area he was throwing in because we were afraid he’d throw it out of the throwing area altogether.”

(If you ever wondered about the Sports being held on a Tuesday evening, by the way… “It started as a draper’s sports, between all the draper’s shops,” says Walley. “That’s why it was held on a Tuesday, because that’s when the draper’s assistants could participate. When we changed to a Saturday a few years ago, it didn’t go well, because Tuesday was the traditional night for it, and that’s why we reverted to Tuesday and it’s been flying since.”)

Such an event takes a lot of organising. Hodgins was a key man on the committee for decades.

“He was a great man to lengthen a meeting, because he was always keen on everybody having their say,” says Walley.

“But another huge talent he had was names — he’d remember names and pronounce them properly, he was fantastic for that. Our commentator has to get the names for the sports a couple of days beforehand to make sure he knows them, but that was no bother to Dick.

“He was quiet in a lot of ways but he knew so much about athletics. Times, venues, how many times an athlete had run that time and this time — unbelievable knowledge.”

Hodgins wasn’t just an administrator, either. He had had an outstanding running career before becoming an official, first with his club, Leevale, and then the City Sports.

“He was a most unassuming guy,” says Walley. “Since he passed away I’ve had people say to me, ‘I never knew he’d achieved so much in athletics’— even guys we’d have run with and against.”

Hodgins running CV was truly impressive. The first schoolboy to break five minutes for the mile when he won the South Munster Schools championship at the Mardyke in 4:48; in 1963 he won the Irish 1500m title held as part of the Cork City Sports.

Over the next 12 years, he went on to win 14 Irish titles: in 1967 he became the first Irish champion under BLE when winning the 15-mile title, from Cork to Cobh; that same year, he ran the 5,000m for Ireland in the Europa Cup.

In his international marathon debut in Spain in 1969, he came second to Olympic champion, Mamo Wolde his time 2:25:02; he won three of the four international 10,000m races he participated in, won the National Marathon in Galway in 1975, recording a time of 2:19:46 and ran his last marathon in Cork in 1984 in the Vets M40 category. He won, of course.

Abroad, he was the face of the Cork City Sports.

“He was well known,” says Walley. “I went to conferences with him all over and people would know him well, they’d be over to chat to him straightaway.

“We’ll miss him, absolutely we will. We’re a family, really. Our counterparts in Europe are paid, but we’re not. We were all involved, we competed ourselves in our time and we’re just trying to give others the same experience now, and Dick was a big part of that. He held it all together for so long.

“He did the work of three or four men, to be honest.”

Only last November he was honoured with the Lifetime Service to Athletics award by Athletics Ireland. He is survived by his wife Mary Pat (Russell) and children Ricky, Jill, Carol, and Mark.