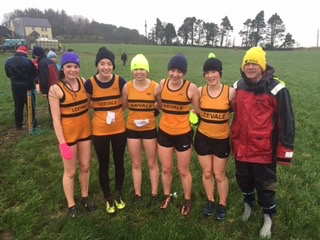 There was a poor turnout in Enniskeane yesterday for the Munster Junior & Intermediate Cross Country Championships, which were held in along with the juvenile inter-county relays. Weather conditions were difficult, making for tough running for the athletes that competed. Leevale athletes filled the first four positions in the Junior Women’s event, Rhona Pierce leading home her clubmates Maeve Ahern, Louise Shanahan and Alannah Neff. The club had no competitors in the Junior Men’s event, and in fact only two athletes competed in total.

There were also small fields in the Intermediate races. The men’s race was won by Leevale’s Darren Molloy, just ahead of Donal Coakley. Michael Creed in 12th and Tomas Kenefick 17th helped Leevale to a narrow team win from East Cork.