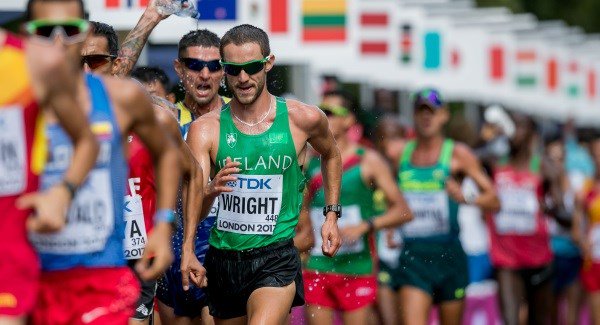 The World Athletics Championships drew to a close earlier than planned on Sunday with Alex Wright suffering disqualification in the men’s 20k walk, writes Will Downing in London.

Alex was trying to get back up with the main leading bunch after having to replace his shoe, when clipped 4km into the race.

The Leevale AC athlete made a big move at 8km to bridge the short gap from 19th place, twenty seconds down on the leaders, but was carded three times in quick succession for lifting – losing contact with the ground – and was sent off the course with eleven kilometres raced.

He was victorious in a sprint finish with neutral Russian athlete Sergei Shirobokov in 1 hour 18 minutes 53 seconds, with Brazil’s Caio Bonfim in third.

Wright relayed afterwards: “At 4k, someone clipped the back of my shoe and it fell off. I had to stop and put it back on, then for the next few kilometres, I was chasing down the group again. It just threw me a bit and I ended up having to chase. At 8k, I was still chasing and then the cautions started coming in. When you’re giving the perception to the judges that you’re falling off the group, it doesn’t look good. I picked up three cards and I was gone.

“Until my shoe came off I was up there in the lead group, but then fell back.”