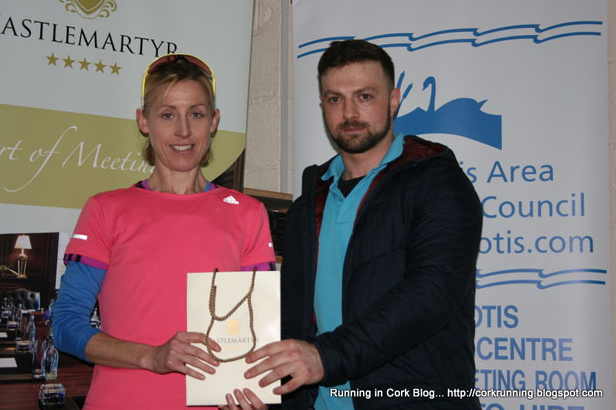 The much anticipated summer season beckons as another month of road racing ticks by for our Leevale athletes. We enjoyed a much welcomed run of fine weather meaning our hallowed stomping ground at the UCC farm is firmly back in action. The race action is also coming thick and fast now with the evening race season officially kicked off but first up was the BHAA 10k on April 2nd where Finbarr O’Dwyer had a good run taking 3rd place and Ian O’Leary took the M45 win. On the same day the Leevale senior men were victorious in Kerry in the Munster Road Championship 4 mile. The team pipped Ennis Track in what was a highly competitive race (note times not available). Mark Hoey, Tim Twomey, Mark Walsh and Chris Murphy were the scorers for Leevale.

Next up was the first of the evening races in Youghal on April 6th where the Emer Casey 5k kicked off at 8pm. Sinead O’Connor comprehensively won the ladies race and in the mens Eric Curran was 2nd and Mark Walsh had a great run in 3rd.  A few days later in Dromahane, Leevale dominated the 5k race with Anthony Mannix and Carol Finn taking the wins. On Sunday April 9th In Cobh, Sinead O’Connor took another win in the Great Island 4 mile race with Lisa Hegarty coming in 3rd and Ian O’Leary also 3rd in the mens race. On the same day Jessica Bruton took 2nd place in the 10 mile race.

On 9th of April the national 10k championships were once again held in the Phoenix Park and it was the Leevale ladies in the spotlight with Claire McCarthy earning overall silver and Carmel Parnell winning the F60 title.

On Easter Monday Carol Finn picked up a win in the Boherbue Kiskeam 4 mile while on the other side of the country Conor McCauley was the winner in the Rosslare 10k. A few days later there was a fantastic turnout in East Cork for the highly regarded Ballintotis 4 mile race and it didn’t disappoint. Leevale athletes were out in force led by Claire McCarthy earning a hard fought win just edging Youghal athlete Aoife Cooke while Niamh Roe came 3rd and Eric Curran also took 3rd in the mens.

On April 23rd the Leevale senior women retrospectively earned bronze after the initial winners Queens were later disqualified. The team were represented by Carol Finn (5:15 1 mile), Claire McCarthy (10:49 2 mile) and Freda Davoren (5:17 1 mile). On the same day in West Cork, Andrew Sheehan was a comfortable winner in the Ross 10k. On Wednesday 26th in Crosshaven, Fionnula Desmond was 3rd in the Crosshaven 10k and Ros Mackeown won the 5k. In the BHAA Stryker 4 mile on Thursday 27th, Helen Leonard and Lisa Hegarty took 2nd and 3rd respectively while Sharon Rynne took the win. On Saturday 29th Conor McCauley came 2nd in the Waterford to Tramore 7.5 mile race running a massive 7.5 mile pb.

To wrap up, a big congratulations to our own Claire McCarthy who was officially selected to represent Ireland in the marathon for the upcoming world championships in London this August. After running the qualifying time of 2:38 in Berlin last September, Claire has been showing excellent form in recent weeks and it was no surprise to see her get the nod from the selection committee. It’s a huge achievement for Claire and the club and we wish her all the best over the next few months in preparation.