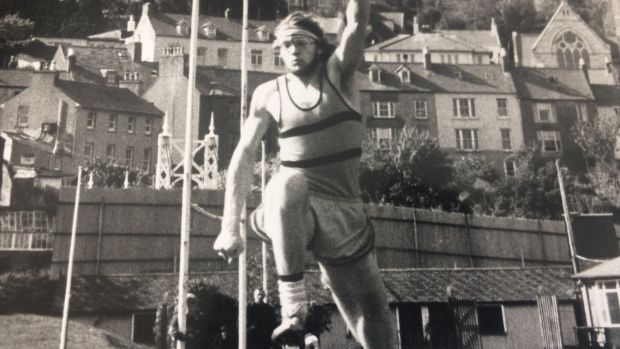 Blame it on a simple twist of fate. Because the last thing Colm Cronin expected when he left Cork city for the hallowed halls of the Ivy League was that he’d set an Irish record which is still standing 40 years later. Or that he’d end up telling me about it on some mutually familiar terms.

This is coming into peak indoor season already, Sunday’s National Championships at Abbotstown promising some fiery events on the track, less so in the field.

Records may well be threatened but one thing is certain: no athlete will touch Cronin’s triple jump best, set in March 1978, when after one neatly executed hop, skip and jump he cleared 16.27 metres – or 53ft, 4½in, as measured back then.

It’s the longest standing Irish senior record in the books, by some distance – the only one stretching back to the 1970s (also surpassing Cronin’s outdoor record, of 15.89m, set a year earlier). Truth is no Irish athlete has come close to breaking it in the 40 years since, despite all the so-called advances in the science and facilities and technology, not forgetting the protein shakes, compression socks, and recovery boots.

“It never once entered my mind that record might stand for so long,” says Cronin, now back living in his native Cork.

“For years after, when I was working in the US, I actually presumed it must have been broken. The triple jump is a very technical event. A lot has to go right, a lot can go wrong. And in some ways for me it did happen by chance.”

Indeed Cronin wasn’t strictly meant to be a triple jumper. Back in 1975, he was Ireland’s outstanding schoolboy athlete, his 6ft 6in 15-stone frame winning him several underage titles for North Monastery and his club Leevale – even if he looked more like the drummer from Led Zeppelin. He ran, hurdled and jumped, and seemed destined for the decathlon if only there wasn’t a problem with the pole vault: Cronin was so strong he kept breaking the poles.

He was contacted by three US Colleges – Michigan, UCLA, and Texas-El Paso – before, by chance, competing at an Irish Universities event at Belfield against an Ivy League selection, including Harvard, Yale and Cornell. When they saw Cronin in action they also got excited, prompting another offer from Brown University, in Rhode Island, slightly more liberal by Ivy League standards.

“It was also beside Providence College, where there was already a good Irish crew, John Treacy, Mick O’Shea, Mick Byrne, and it turned out we hung around a lot over the four years I was there. Brown made for an interesting environment, you do meet some incredibly bright people, from all walks of life, but a terrific experience, above and beyond the athletics.”

This being 1975, for most Irish scholarship students it was typically distance running or bust. Fortunately for Cronin he found perfect like-mindedness in Brown’s assistant coach Bob Narcessian, a former US Olympic hammer thrower, who straightaway mixed Cronin’s strength and power with his own technical know-how.

“Bob was the making of me, brilliant on the technical aspects, big into biomechanics, a really terrific coach.”

Cronin won an Ivy League triple jump title in his freshman year, a New England title as a sophomore, before hitting his peak as a junior. After setting that Irish outdoor record of 15.89m in Copenhagen, in 1977, he returned to Brown with an eye on the 1978 NCAA Indoor Championships, set for Detroit.

He actually fouled every jump except that 16.27m, good enough for third, the only regret being the jump before that was close to 17m, leaving the slightest dent on the plasticine.

In his senior year, Narcessian left the Brown coaching staff, and straightaway Cronin felt his absence. He might well have improved again, although by then his career path was taking priority. After graduating in economics and business, he moved west to Oregon, began trading in stocks and commodities. He made one last effort to reach the 1980 Moscow Olympics but after breaking his ankle at the US Indoors in LA, suddenly every distance was not near.

His fate then also twisted in another way, as Cronin’s still natural athleticism drew attention from the Seattle Seahawks, then a still fledgling franchise in the NFL. Through some friends he tried out for one of the tight end positions, was offered a contract, then thought the better of it.

“The salary in the NFL at that time wasn’t much different to what you’d make right out of college so I just decided to focus on my career. It’s a lot different now, but in 1979 the job was more attractive, rather than getting beat up every weekend.”

In 1988, his 16.27m college record still intact, Brown inducted Cronin into their Hall of Fame: I know that because Cronin’s name was on the indoor track wall during my four years out there, and 40 years later, that record also remains unbroken.

It says a lot about just how far an athlete can go when the mix is right: a good talent, a good coach, and a good brain. Not necessarily in that order.

Looking back now on that great leap, Cronin has mixed feelings.

“I still love the sport, love the event, and it would be a great thrill for me to see someone move it on. The knowledge should be there to put in that level of performance… you see the outstanding job the GAA and rugby are doing to promote their sport, and maybe that same kind of drive is not there in athletics. I really don’t know what it will take to break it.”