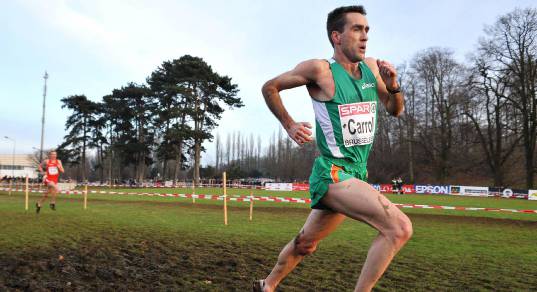 MARK CARROLL is one of the greatest middle-distance runners that this country has produced.

Born in 1972 Mark grew up in Knocknaheeney and started his athletic education at the North Monastery under the guidance of athletics coach Brother John Dooley. Dooley was the man who convinced Mark to take athletics seriously and the combination helped the school’s team become one of the best in the country.

The advice that Br Dooley gave to Mark over the years has always been spot on. He recalled one such conversation with Dooley just before the European Junior Men’s 5,000m in Thessalonica Greece in 1991. “I was suffering badly with an Achilles tendon injury and the Irish championships were only weeks away. “Brother Dooley called me in one day and said to me if I missed the national championships it would give my injury time to heal and I would have a better chance of winning a European title.”

The rest is history as Carroll put in a remarkable final lap to be crowned European champion.

Carroll went to Providence College in 1991 on a four-year scholarship under the direction of Ray Treacy, the brother of Mark’s hero, John.

Mark continued to improve at Providence and by the time he completed his scholarship in 1995 he had just missed out on Frank O’Meara’s Irish 5,000m record of 13.13 at a meeting in France such was his progress.

Mark later reached the final of the 5,000m at the World Championships in Gothenburg where he finished 12th.

1996 was a disaster for Carroll as he suffered a stress fracture of the leg which forced him to pull out of the Atlanta Olympics.

“At that time prior to the Olympics I ate, slept and drank athletics and when I picked up the injury I realised there is more to life as I took three months out of the game and basically enjoyed myself before recharging my batteries to race again in 1997.”

It was off to Berlin a few days later and a confident Carroll set yet another record when he ran the 13.03 in the 5,000m to break the 13.13 by a big margin. Probably the greatest race of Carroll’s career was when he set the 3,000m record of 7.30.36 in Monaco which could stand for decades.

It’s more than two seconds faster than Mo Farah has ever run and is essentially the equivalent of running two four-minute miles back to back.

Prior to setting both of these records Mark won a bronze medal at the European championships held in Budapest but he suffered more disappointment in 1999 when he was diagnosed with anemia.

Carroll had run badly at the World championships in Seville and only discovered he was anemic after the championships that resulted in another break from the sport.

Although Carroll loves athletics there was always the issue of drugs that irked the Corkman.

“The one problem that I have with athletics is the number of drugs in the game as my attitude to the sport is simple it is a gift that shouldn’t be abused.”

In the comeback trail in 2000 Mark win the Wannamaker Mile at Madison Square Garden in New York but in the same year he won the 3,000m gold in Ghent.

Just when the country and city were getting over the celebrations, he produced another storming 27.46 run in the 10,000m to smash John Treacy’s record of 27.48.

Sadly for Mark he peaked too early in that season and the Sydney Olympics proved a crushing disappointment when he lost out in the 5,000m heats.

Mark then decided to change from Track and Field in 2002 to Marathon running and in his debut race in New York he ran a superb two hours and 10 minute to finish in sixth place.

Today Carroll lives with his wife Amy in Des Moines Iowa where he is director of track and field and cross country at Drake University.

No legacy is so rich as honesty, at least not according to Shakespeare, and Mark Carroll will forever be remembered as a European champion who represented this city and country with pride and dignity.

Mark Carroll won the European 5,000m Junior Men’s championship in 1991 that was hosted at Lille in France.

Carroll achieved a lifelong ambition in 2000 when he won the 3,000m European Athletics Indoor Championship 3,000m in Ghent.

Probably the greatest race of Carroll’s career was in Monaco in 1999, when he set the 3,000m record of 7.30.36. It could stand for decades. It’s more than two seconds faster than Mo Farah has ever run, and is essentially the equivalent of running two four-minute miles back to back.