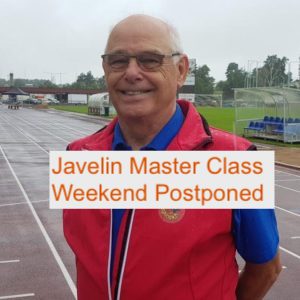 Due to the sudden illness of Anders Borgström, the Javelin Master Class Weekend has been posted. We wish Anders a speedy recovery and we  will rescheduled the class for the earliest possible date once Andres is available.

Anders was the Swedish national coach for javelin from 1971-1998 and the leader of the biomechanics crew in throwing events at the World Championships in Göteborg in 1995. He has been extensively involved in Nordic Sports’ development of new and improved javelin models from 1973 to the present day.

He is an expert commentator on athletics, appearing on Eurosport for 16 seasons (1999-2014) after acting in a similar role on SVT in 1998. Anders has lectured at coaching courses and seminars as an IAAF Lecturer at the IAAF’s development centres in Jakarta and Cairo. In addition, at the invitation of the IAAF and national federations, he has delivered guest lectures and clinics in the USA, England, Scotland, Belgium, Hungary, Nigeria, New Zealand, Australia, Fiji, Germany and Norway. The lectures have usually focused on the throwing disciplines, javelin throwing in particular.

In 2019 he was presented with his European Athletics Member Federation Award by Swedish Athletics. From 2016 to 2020 Anders has worked with the athletic federation in Chinese Taipei, where 2 of his athletes won gold and bronze javelin medals at the World University Games (Cheng Chao-tsun with an Asian record of 91.36m). In 2021 he was a panellist at the first European Athletics Coaches Association’s Virtual Olympic Coaches Club.