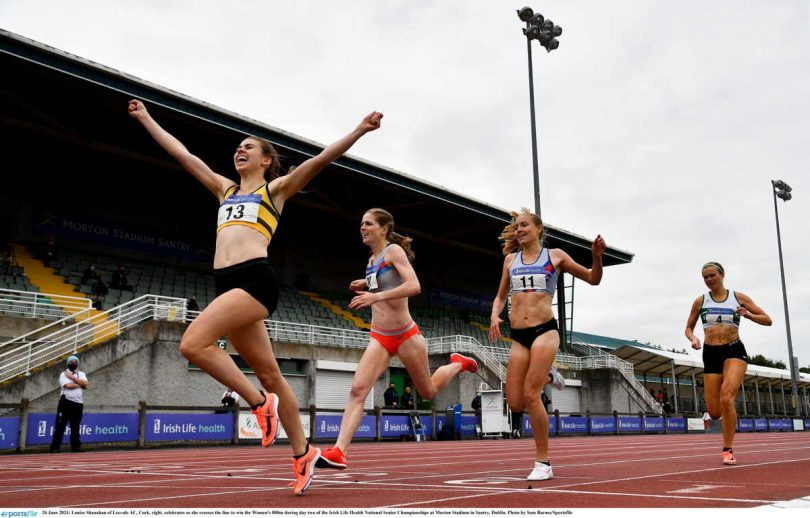 In the year of an olympics combined with the lack of competition over the last 12 months there was additional interest in this years national T&F championships. It was evident from the start that Leevale athletes arrived in Morton stadium ready to do business.

On Friday evening Una Brice and Una Samuels started proceedings in the women’s pole vault. Una Brice claimed the first medal of the championships when she took silver with a vault of 3.35m. Una Samuels finished 6th with a 3.05m vault.

Louise Shanahan, Annette Quaid  and Charlie O’Donovan safety navigated their way through the heats of their respective 800m and 1500m events.

On Saturday Michelle Finn got the action underway with her fourth successive title in the women’s 3000m steeple chase. Tokyo bound Michelle posted another impressive performance as she signed off from domestic competition with a national title. Michelle was joined by Eilish Flanagan (Carmen Runners AC) at the front of the race with the two athletes opening a sizeable gap on the field through the first 2,000m. Michelle turned on the afterburners to power clear over the final two laps to come home in a time of 9.36.94 a championship record.  Club-mate Jessica Coyne crossed the the line in 4th place in a time of 10:42.35.  Later in the evening Michelle finished 4th in the Women’s 1500m.

The Women’s 800m has been on fire over the last 12 months and still the possibility of Olympic qualification on the line for four athletes. With ranking points available it was no surprise that the athletes involved served up the finish of the day with Louise Shanahan (Leevale AC), Siofra Cleirigh Buttner (Dundrum South Dublin AC) and Georgie Hartigan (Dundrum South Dublin AC) all clocking 2:03 in a blanket finish.

Louise backed herself with an inside run up the home straight to finish in a winning time of 2:03.62. Buttner claimed silver, with club-mate Hartigan the bronze on the dip for the line.  Annette Quaid, (masters athlete extraordinaire) crossed the line in 2:11.02.

The conditions were not ideal for pole vault but that did stop three athletes clearing 4.30m. Conor Callinan (Leevale AC)  secured the title with 4.40m from Michael Bowler in second who also cleared 4.40m. Conor, the youngest of the Leevale to medal at the national championships has an extremely bright future in his chosen event. His club mate Josh Fitzgerald cleared 4.10m on the day setting a new PB.

Sam Healy joined nineteen athletes on the runway for the Men’s Long Jump. Sam took silver with a 7.50m jump, just 1cm behind Adam McMullen (Crusaders) who claimed the gold with a 7.51.

It was great to see two Leevale sprinters lined up in the final of the senior men’s 100m. Conor Morey in lane 4  and Colin Doyle in lane 7.  The two athletes ran a superb race pushing all the way to cross the line 3rd and 4th respectively, Conor in 10.61 and Colin in 10.65.  Later in the day they were joined by Ciaran Dee and Sam Healy where the Leevale team took victory in the 4x100m relay in 42.42.

Charlie O’Donovan returned from Villanova to compete at the national championships at the end of a busy schedule in the US. In a slow tempo congested race Charlie was right in mix at the bell, ultimately crossing the line in 5th place in 3:50.71.

By the end of Day 2 Leevale had secured 4 gold, 2 silver and one bronze medal as well as a number impressive and personal best performances. 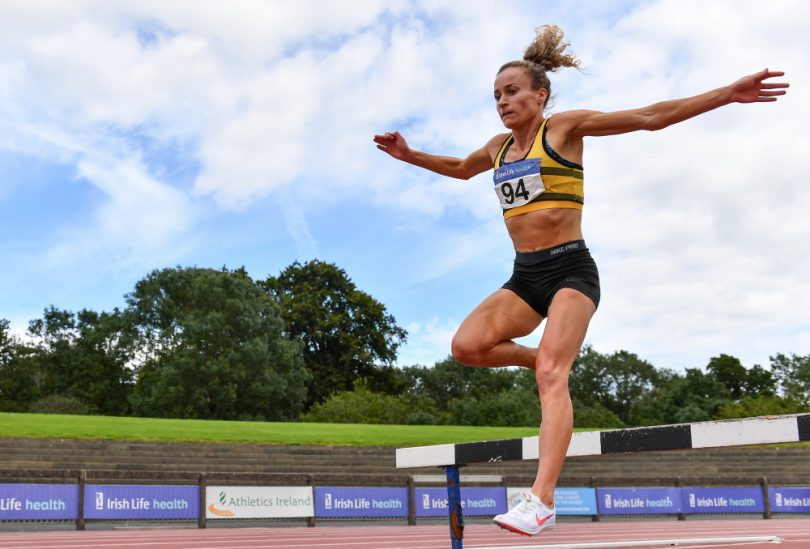 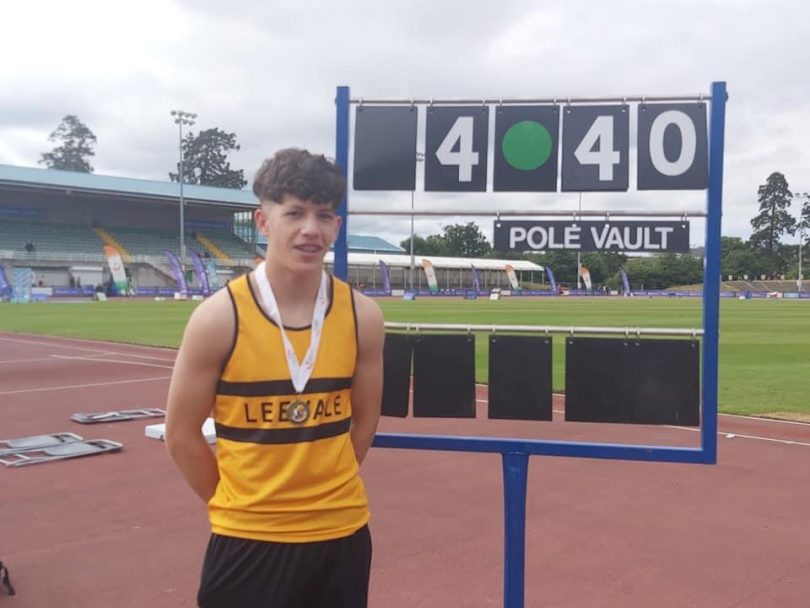 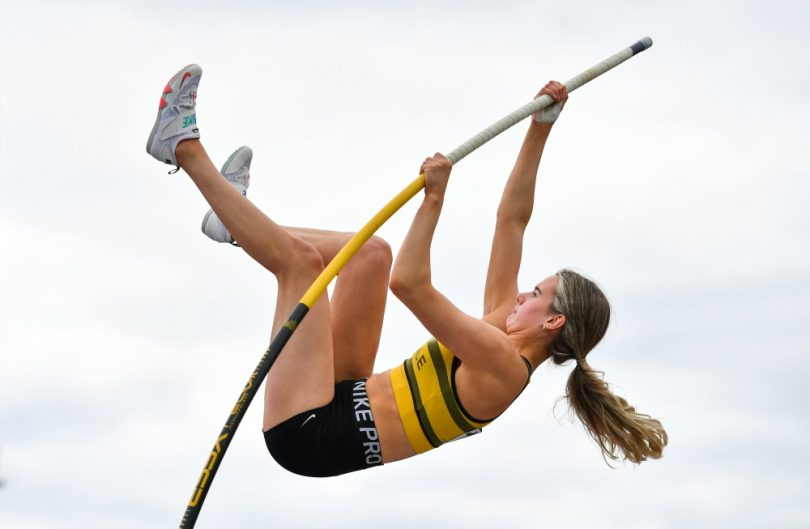 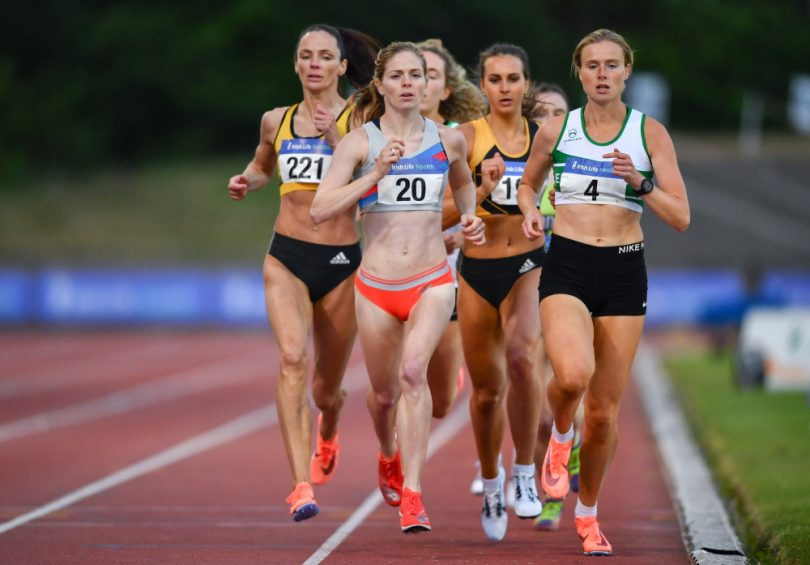 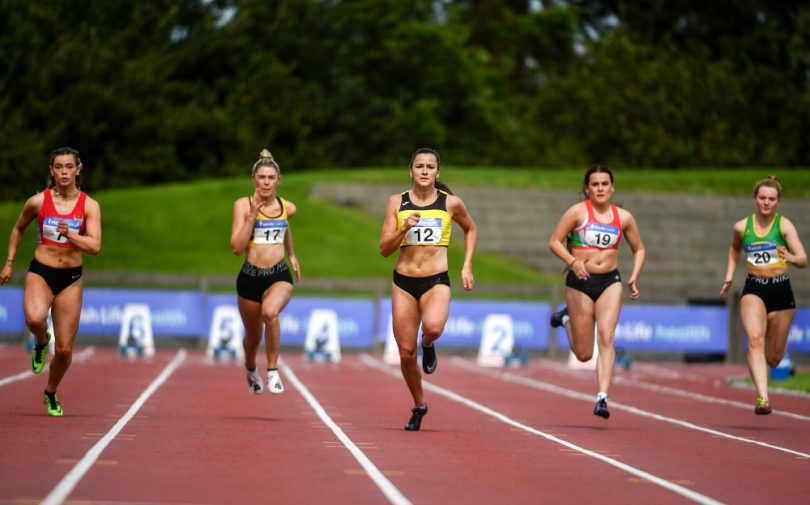 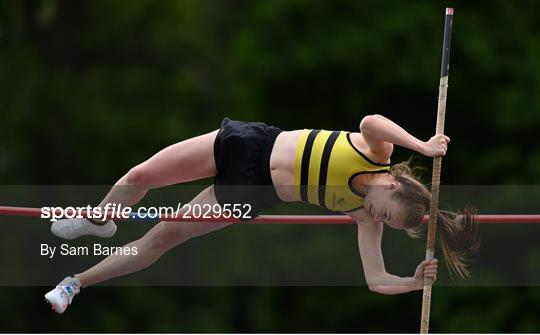 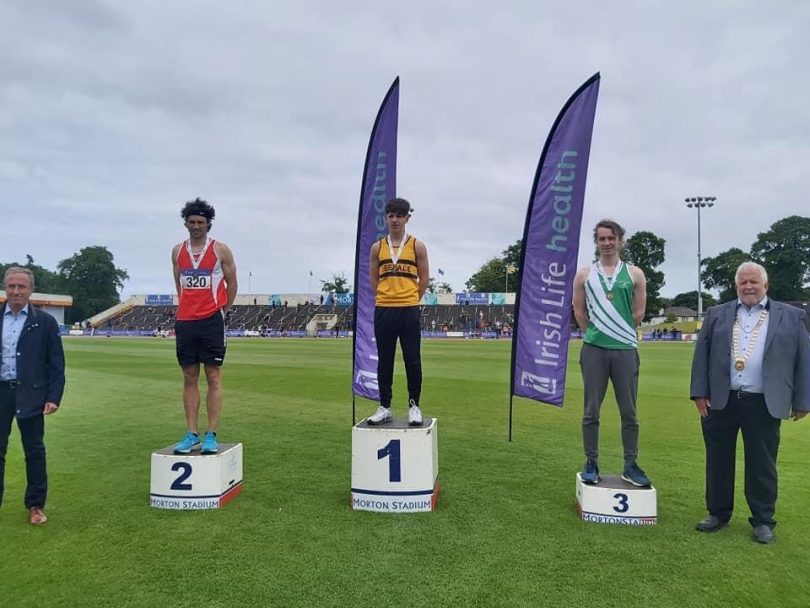 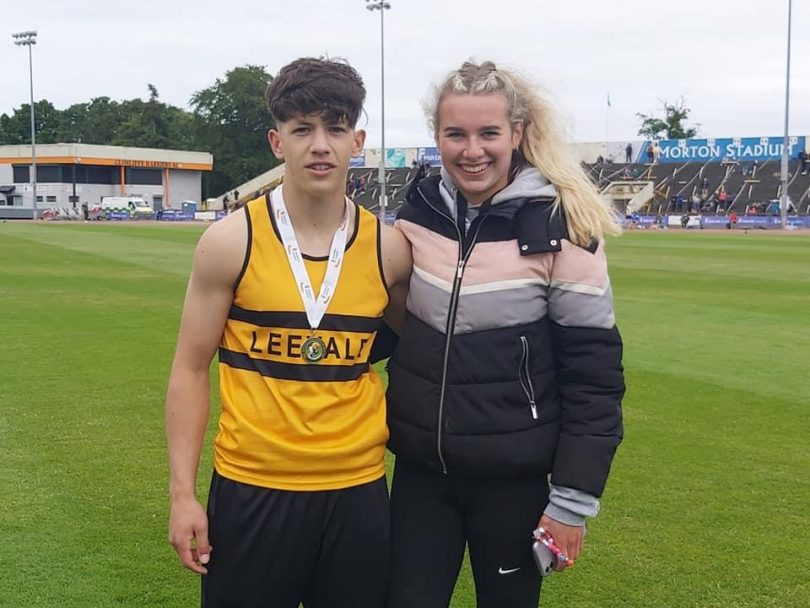 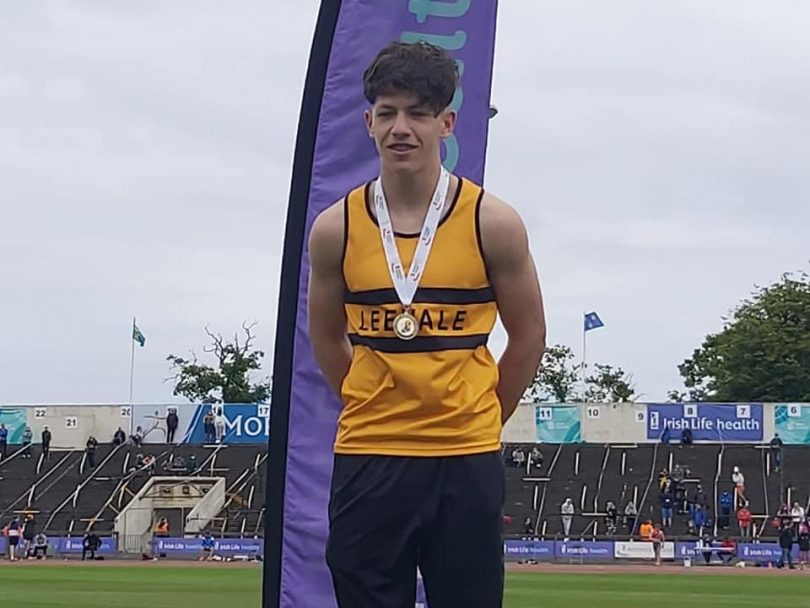 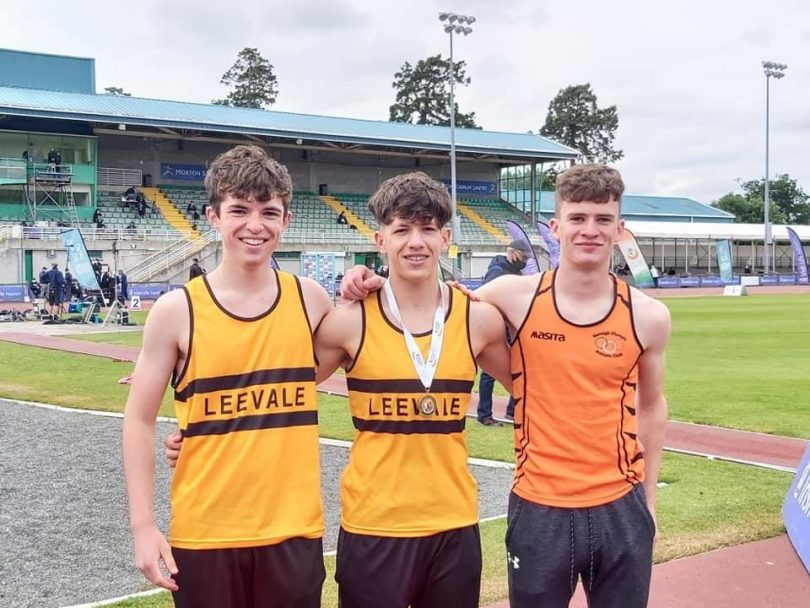 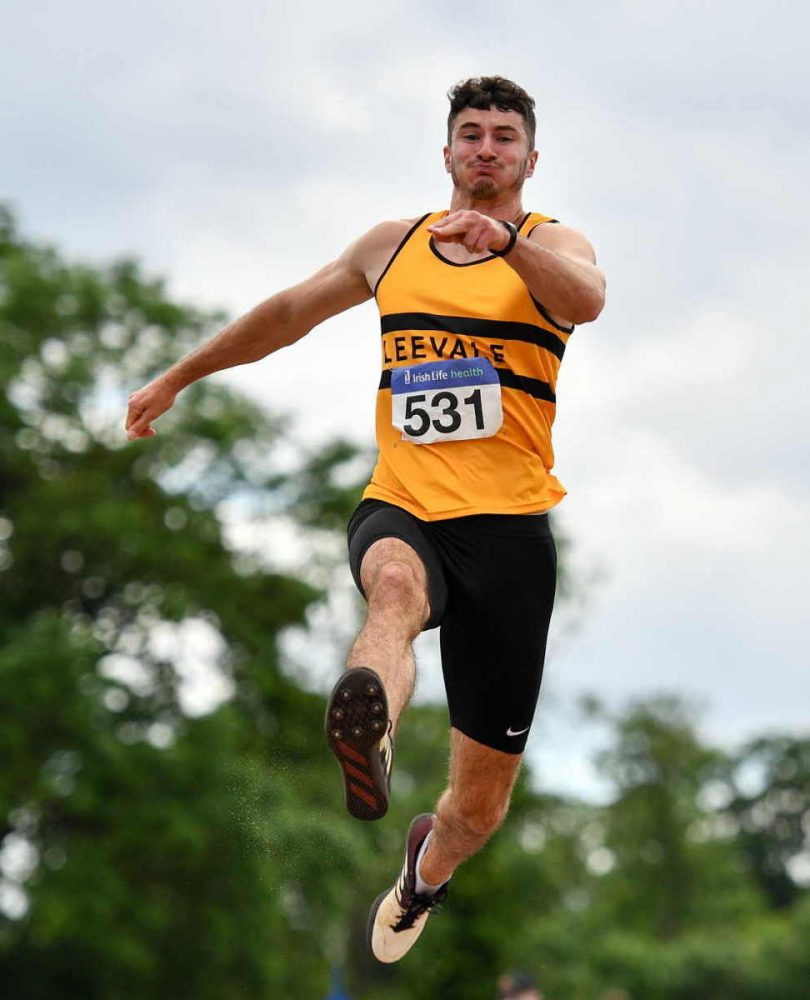 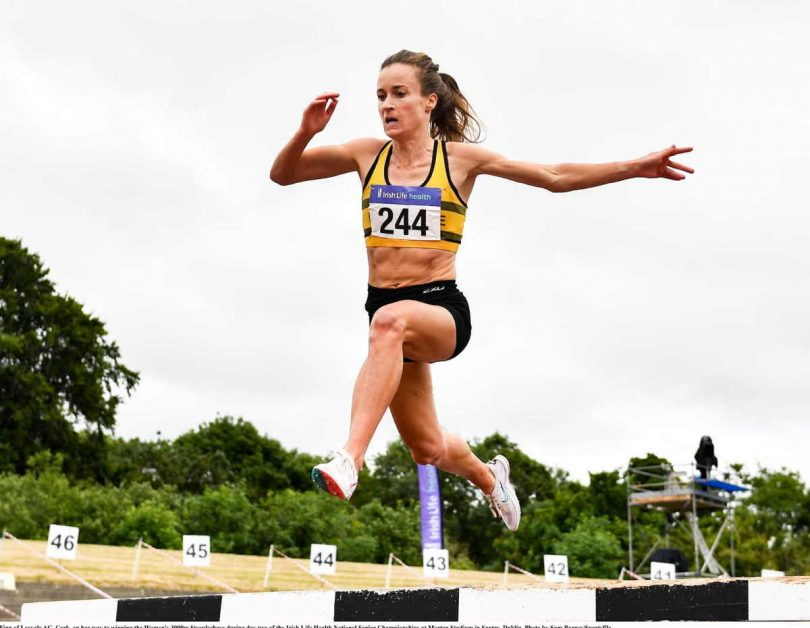