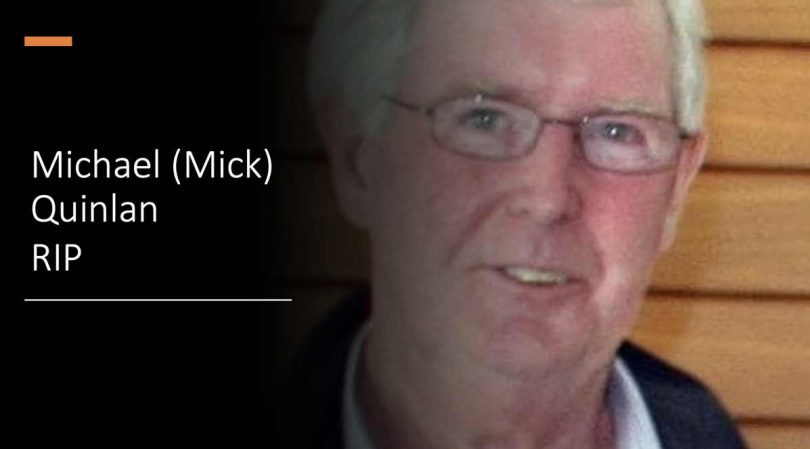 It was indeed with a great sense of sadness and loss that we have learned of the death of another Leevale and Cork City Sports stalwart and dear friend, Michael (Mick) Quinlan. Whilst Mick had been ill for some time he continued to keep in contact with his many friends particularly those in Athletics.

Mick was an original and lifelong member of Leevale AC .As an athlete, during the early years of the Club, Mick competed on successful cross country and track and field teams. His favourite individual track events were the 400 and 400 hurdles ,respectively, in which he featured  on most occasions.Mick was Captain of Leevale in the early 70’s.It was around this time that my late brother Bernard and I came in contact with Leevale and indeed Mick Quinlan ,at the many Sports Meetings throughout Cork County .It was through Mick’s and others influence and friendship that Bernard and I decided to join Leevale and we never looked back since .I had the pleasure of being on many victorious Leevale teams with Mick when Leevale won every Club competition from the George V Ryan trophy to National League and National Relays

However, whilst Mick had many successes in cross country and track events, it is in the area of administration and committee that Mick excelled. He was the author of the Leevale Club Constitution, which still exists today. He served the club as Captain, Chairman, Vice Chairman, and Vice President .Mick was well known as the organiser of great Leevale social events and spearheaded the fundraising for the Club for many years. Mick has always made himself available to give advice when requested by Committee.

In 2017 Leevale AC celebrated the 50th anniversary of its foundation with the publication of the Club’s history in the form of a beautiful illustrated book (LEEVALE HOME OF CHAMPIONS).Mick played a major role in putting the material together for this publication ,which will stand as part of Mick’s legacy going forward.

As president of the Cork City Sports for many years it has been a great honour and pleasure for me to work with Mick during his tenure as a valued member of our Committee. Mick took on the role of organizing our Annual after Sports Gala Function. He was a perfectionist, totally honest, caring and lovable .Mick was a thorough gentlemen and friend.

Whilst this time is one of sadness and remembrance on Mick’s passing, let us reflect and celebrate a truly remarkable life and terrific guy and be grateful, and thank God for giving us the unique pleasure of knowing and working with Mick Quinlan.

On my own behalf and on behalf of everyone in Leevale and the members of Cork City Sports Committee I express our sincerest and deepest sympathy to Jo, Robert, Emer, and Mick’s extended Family.