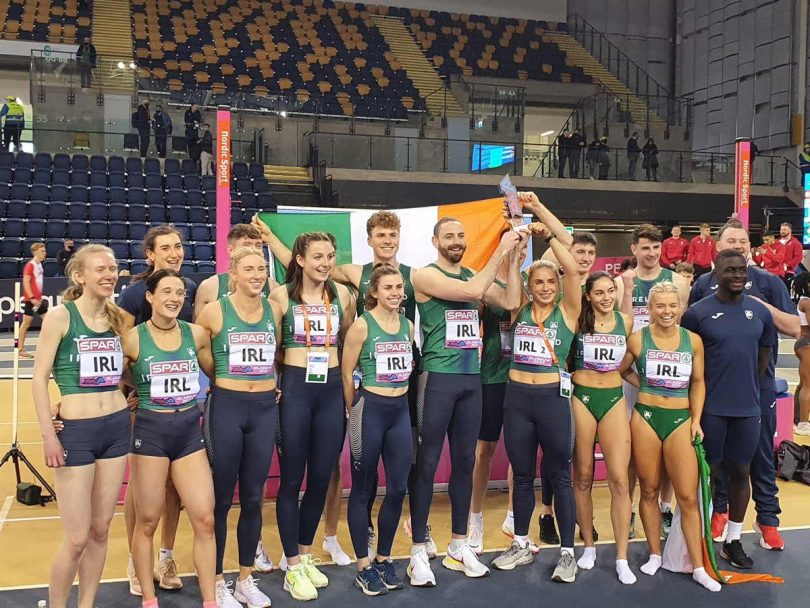 Team Ireland took the Dynamic New Athletics Competition in their stride with new PB’s for athletes and strong performances across the board.

The excitement at this event began at the off set, a strong performance from the mixed relay team and an impressive performance from James Kelly in the Shot Put, Olympian Louise Shanahan took to the 800m. Louise made a dash for first place in the last 200m before Scotland’s Jenny Selman pushed ahead to take top spot. Louise secured a second-place finish and a seasonal best time of 2:04.73.

Kate Doherty in the 60m Hurdles also secured a second place finish, just 0.3 seconds behind event favourite, Olympian Teressa Errandonea. She set a new PB of 8.25.  It was a superb performance from Kate, making her one to watch in this year’s senior competition.

With new PB’s on the Track there was also one in the Long Jump for Ruby Millet, after a missed opening jump, she came back and set a new PB of 6.40m, just .18 shy off the winner from Portugal Evelise Veiga who set her own new PB of 6.58m.

Off the back of an incredible streak of performances Molly Scott put in another great performance for Team Ireland, coming in second behind Team Spain’s Olympian Maria Isabell Perez, with a time of 7.33s.

The main attraction at this year’s DNA Competition was “The Hunt”, it was also the deciding event. After a 77 point build up after impressive performances from Team Ireland including Israel Olatunde in the 60m and Ciaran Connolly in the High Jump where he equalled his seasonal best of 2.05m, Ireland went into the hunt with an impressive head start of 6.70seconds. Alanna Lally, Roland Surlis, Roisin Harrison and Eanna Madden secured a third-place finish for Team Ireland with Silverware to show for the efforts of this Irish Team.