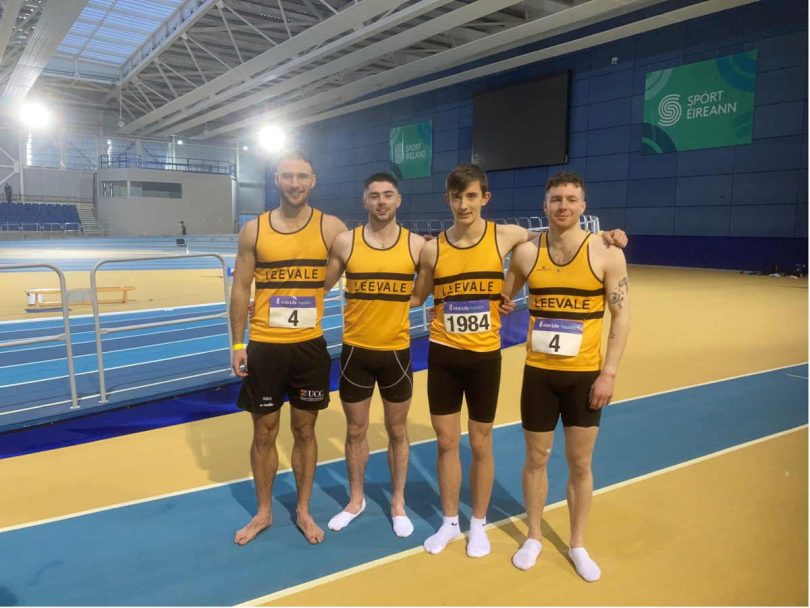 There were some great performances at the TUS Arena in Athlone on Sunday to ensure that the club have qualified for the National Indoor League Finals in both Men’s and Women’s competitions.

The Men qualified in first place a mere half a point ahead of Clonliffe Harriers and it should make for a great battle in Abbotstown On Feb 12th.

A recap of the mens results from round 1 where Scott Gibson was first up in the 60m, a run of 6.98 was good enough for 3rd and 11 points on the board.

Next up was our new Mens Club Captain Ryan Duggan in the Shot, a good throw of 12.12m saw Ryan finish 4th and another 10 points in the bank. 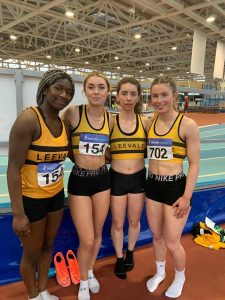 Conor Callinan took to the runway for the pole vault, a new National Indoor Junior Record and victory with a clearance of 4.70m, 1st and max 14 points.

The final event of the day for the men was the 4x400m relay. A fantastic run from the lads to win with a new National Indoor Club record of 3:23.99 – team was made up of Colin Doyle, Ciaran Dee, Sean Carmody & Scott Gibson.

So at the end of day one we were top of the table and well placed for round 2 and qualification.

Round 2 got underway with Jack McGrath and his first ever run over the senior 60mH – a very respectable 9.02 was good enough for 2nd and we were up and running with 12 points on the board.

Unfortunately we had no participant in the Triple Jump – something for us to correct for the final.

Padraig O’Callahgan was next up in the field – Padraig was throwing the Weight For Distance and finished 2nd with a throw of 5.83m, losing out by a mere 1cm to the winner, but, 12 more points in the bank. 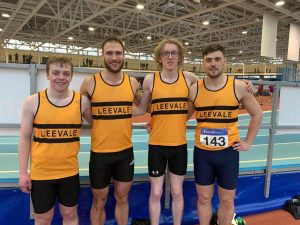 The High Jump was next up but again unfortunately we did not have any participant.

Back to the track and an opportunity for Scott Gibson to try chase down Marcus Lawlor in the 400m. Scott ran a great 48.89 to lose out narrowly but still claim 12 points.

The boys (Colin Murphy, Scott Gibson, Jack McGrath & Conor Morey) ran a great relay with a time of 1:29.88 (a new Munster Indoor record) in heat 1 and had to wait around for Clonliffe to run in heat 3 – their time of 1:30.10 meant victory for Leevale and top qualifying spot ahead of Clonliffe by just half a point.

The Women’s team this year sees the first appearance at senior level for a number of athletes and the team led by our new Club Womens Captain Annette Quaid.

Day one got up and running with one of the youngest on the team Fatima Amusa in the 60m, Fatima won her heat in a time of 8.04, good enough for 5th overall and 8 points on the board

In the field we had Una Samuels stepping up to the mark in the pole vault, Una jumped 2.90m to finish 2nd and another 11 points in the bank.

Kate Naughton made her debut in the senior shot with the absence of a recognised shot putter, Kate threw a very respectable 7.59m for a 9th place finish and a really valuable 4 points.

Staying in the field we had Gabby Bowen next up in the Long Jump – a good season opener of 4.80m was good enough for 4th and another 9 points.

On to the relay and without any recognised 400m runner we managed to field a team made up of Fatima Amusa, Ciara O’Mahony, Ava Cashman and Annette Quaid – a time of 4:24.05 got them home in 7th for another valuable 4 points.

The end of day one saw us top of the table a mere 1 point ahead of DSD and Donore.

Day 2 started with the 60m Hurdles and the first run over senior hurdles for Lucy-May Sleeman, a time of 9.20 was good enough to win her heat and finish 3rd overall – 10 points in the bag.

Next up was Annette in the 1500m on the track – Annette led from the gun again and in a gutsy display managed to hold off Aoife Delargy to win in a time of 4:38.68, 13 points gained for the victory.

In the absence of any of our recognised High Jumpers Orla O’Sullivan stepped up again – to her credit she managed 1.30m and picked up another valuable 2 points.

Next up in the field was the Weight for Distance – unfortunately we did not have a competitor and so lost some ground to the other clubs.

Annette Quaid took to the track in the absence of a recognised 400m runner. Once Annette finally got out of the blocks she clocked a very respectable 59.35 which was good enough for 5th and a further 8 points.

Heading into the final event of the day the 4×200 relay we were safely through to the final and sitting in 3rd place, 10 points behind DSD and 4 back of Donore.

With 3 juniors – Fatima Amusa, Lucy-May Sleeman & Ella Scott – and under the guidance of Shona Lowe they put in a great run to finish in 1:44.11 – losing out narrowly to Raheny but crucially ahead of DSD and Donore.

The final standings had us finishing in 2nd just 7 points behind DSD and 7 points ahead of Donore.

Well done to all the athletes who have competed to date and to the coaches who have really supported getting the teams out.

Both competitions will be very competitive on Feb 12th in the National indoor Arena in Abbotstown. Both teams could do with all the support we can give them on what promises to be a great day out for the club.