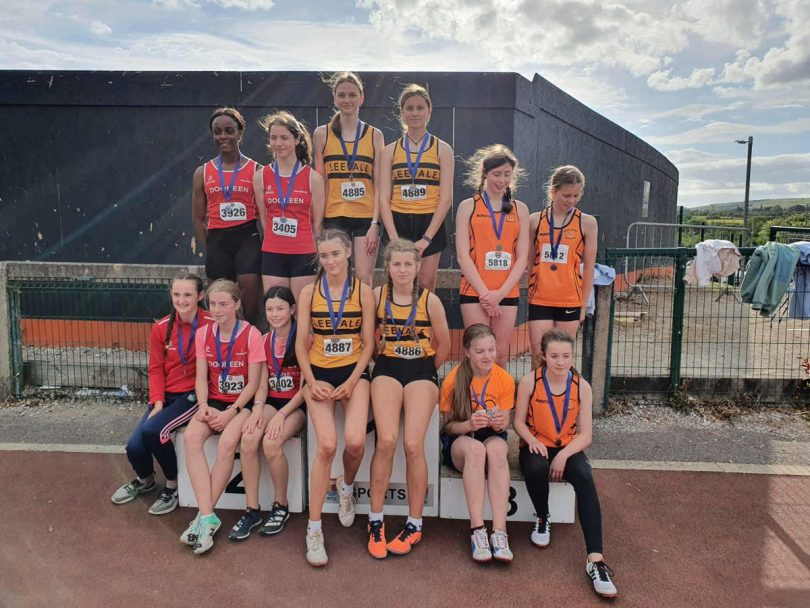 With qualification for Nationals at stake for our 14s, u15, and u16s and invaluable competition time and practice for the u17s-u19s, 79 Leevale athletes across both track and field headed for the familiar surrounds of MTU; their aim…to put into action everything they had worked for and to leave their heart and soul on the track, on the mats, in the sand and in the cage.

80m/100m: In the u14s Noelle Mulcahy, Caitlin Hancock, Mia Graham, Katie Culhane, Abby Culhane, Kirsten Shaw and Hazel O’Flaherty took on what is proving to be an extremely competitive age group. With times dropping from the county championships the hard work is evident; Caitlin and Katie made the final finishing 6th and 7th. For the u15 boys Josh O’Mahony, Anthony Goggin and Tyreek Bannon presented the Leevale challenge. Both Anthony and Tyree made the final. Tyreek showed blistering heels chasing down the winner, taking silver in a PB of 11.72s with Anthony taking bronze. Next came the girls. Running fantastic times Sintija Sarkovska was unlucky to miss out on the final; Caoimhe Daly took silver in a PB of 12.80s and her team mate Faye Scriven backed up her PB of 13.00s in the heats, taking bronze. For the u16s the girls showed their strength again – Elena O’Sullivan came off a PB in the heats of 12.49s to take gold followed by Sophie Mulcahy in bronze.

The u17s saw Chris Furlong and Patrick Corkery miss out on the final this time around; John Cashman raced through to what was to be a powerful final. On the girls side Fatima Amusa had the unfortunate honour of a false start leaving the challenge in the final to her compatriots Okwu Backari and Abbie Dorney; both girls showed the depth of Leevale sprinting taking silver and bronze. The u18s were represented by Ella Jenks for the girls and Amir Amro for the boys – both qualified for the Munster final. While Ella was unable to run the final Amir showed the hard work he’s been putting in finishing in 12.12s.  For the u19s the boys were the ones to carry the flag on this occasion. Igor Marczak, Samuel Curtis, Colin Murphy and Yasin Salim Said lined up. Yasin took bronze in the final followed closely by Colin in fourth.

200m: Yet again the 200s didn’t disappoint. Competing in their first Munster 200s the u14s of Abby, Katie, Caitlin and Noelle angled their blocks toward the bend . with all four driving to the line Caitlin made the final taking bronze in a magnificent 27.27s. for the boys Ronan Keenan strode into the final taking silver in 25.15s. The u15 girls and boys were next. Faye and Sintija took on the 200 smashing their PBs. Faye made the final finishing third in 26.68s. As always the u15 boys showed how competitive they are, especially with each other, with Anthony, Josh and Ryan Onoh eager to show what they could do. While Josh took an amazing nearly 0.5s off his PB Anthony and Ryan made the final. Unfortunately Anthony was unable to run the final but Ryan once again laid out his credentials for all to see taking bronze in an awesome 24.66s.

For the u16s Sophie and Natalia showed their work ethic in the heats and both made what was to be a dramatic final. Sophie took gold in the final in 26.11s. However it was the sportsmanship of all the girls in the final that shone through. With Saoirse Dillon from Lios Tuathail taking a bad fall toward the end the girls rallied around her after crossing the line…more concerned about their fellow athlete than who came where. As well as Leevale, clubs such as Dooneen and Limerick are bringing through athletes with an obvious sense of respect and empathy and their Clubs should be very proud of them. In the u17s the girls of Fatima, Abbie, Zoe Conway, Blaithin McNulty and Bavina Crowley packed the final. Fatima took gold in 25.11s pushing all the way to the line with Abbie storming through to take bronze in 26.25s. for the boys Patrick Corkery finished sixth in the final in 25.24s.

400m: The 400m is the toughest sprint…the pain, the agony when all you want is to put one foot in front of the other so you can get to the line and lie down! In the u17s Zoe and Nicole Dinan took it on with the crowd willing them to the finish. Zoe took gold in 59.14s followed closely by Nicole in second in 59.82s.

For the u18s and u19s Maire Hynes-McLaughlin and Ciara O’Mahony took on the two bends to finish second and first in their respective age groups.

Hurdles:  Always packed full of drama the hurdles both long and short lived up to their billing. Our u15s saw Michael and Anthony take silver and bronze in the 80mH and then Michael took another silver in the 250mH the following day. For the girls Sintija and Ava Hanley made the final with Sintija qualifying for nationals in fourth. In the u16s Natalia Golka and Ellie Vaughan-Reddan successfully navigated the short hurdles with Natalia taking golf. Natalia topped that off taking gold in the 250mH as well the day after. In the u17s Okwu Backari showed her class to take 100mH gold in 14.18s; for the boys John Cashman got valuable race time heading home with a gold medal in 15.85s. before moving on to his pole vault Conor Callinan took gold in the u19 110mH beating his PB in 15.11s – but alas a +2.2m/s wing negated the PB…next time.

800m: The two lap challenge began with the u14 girls. Kate O’Donovan set out to secure her place in Nationals – that she did taking fourth in 2:24:36. For the boys Cian Manning, Calum Harrington, Rona Keenan and Luke Merrigan raced against the clock. Ronan and Luke found themselves in the same heat pulling each other through to silver and bronze. While we had no u15 boys this time around the girls were more than enough to bring the Leevale challenge to the starting line. Lauren Dinan and Ella Dinan watched the clock to take gold and bronze in 2:20:61 and 2:29:93. In the u16s Syrah Kenna, taking on her first competitive 800m, was joined by Simone Looney. The girls finished 8th and 9th pushing hard all the way against a decent wind. For the u17s Lauren and Ella’s sister Nicole drove home to take gold in 2:17:89 and for the boys Senan O’Reilly, Eoin O’Connor and Conor Twomey took on the rest of Munster. Senan and Eoin took gold and silver respectively. In the u18s and u19s Katie O’Keeffe and Emma Goulding claimed gold and bronze.

1500m: For their first time the u14s accepted the challenge of the 1500s. In the girls race Aoibheann Lynch and Trinity McDonnell finished 7ths and 16th, with Oran Power finishing 13th for the boys. This was a daunting task for them and all three stuck to their task making their Coaches and parents proud. In the u15s Lauren and Ella went again to take gold and fourth and their places in Tullamore while in the u17s Nicole and Claire Crowley battled it our for the 1st and second places in 4:42:08 and 4:42:86. To top off the 1500s the boys u17 saw Conor Twomey take silver with Fiachra Wall in 5th; the u18 girls took silver and 6th for Katie O’Keeffe and Sorcha Daly; and Daniel Buckley took bronze in the u19 boys.

3000m: Finally to finish the individual track events and middle distance Claire Crowley added to her silver from the 1500s to take gold for the u17 girls in 10:25:40.

It is always a pleasure to see the progress Leevale has made in the field events and the Munster Championships were no different.

High Jump: In the u14 girls Grace Wixted jumped a new PB of 1.50m to take gold with Noelle Mulcahy finishing fourth, reaching her first Nationals, and Kate O’Donovan in 9th. For the u15s Olive Burger finished just outside qualification in 5th. The boys however jumped their way to offaly with Ryan Onoh taking gold in 1.80m and a new CBP and ben O’Brien coming fourth in 1.45m. in the u17s both Maeve Fleming and Matthew Wilkins continued their good form. Maeve took gold but Matthew finished 5th, missing qualification on count back.

Pole Vault: In what has become a strong event for our Club the u15s saw the girls of Maebh Bannon and Olive Burger take silver and fourth in what was a new PB for Olive. For the boys Oscar Naughton took silver. For the 16s Grainne Cronin took silver for the girls and for the boys Alex Neff claimed gold. In the u17s Lucie Healy took third and Dylan Murray took gold for the girls and boys. For the u19s Una Brice and Conor Callinan showed why all the young vaulters in the Club look to them, each taking gold.

Shot Putt: For the u16 girls Muireann Kelleher claimed gold followed up by Briana Onoh taking gold for the u17s with a throw of 13.08m. in the u18 girls Kate Naughton finished second wit 9.2m. Joining them are the u17 boys of Chris Furlong, finishing third, and Garry O’Connor finishing fifth. Joseph Barnidele took silver for the u19 boys.

Discus: Following on from the Pole Vault Oscar Naughton took gold for the u15 boys with 35.40m. Oscar’s sister Kate then claimed gold for the u18 girls and in the u19 boys Joseph Barnidele claimed bronze. In the u18 boys David Scanlon took gold with Finn Fitzgerald in fifth. In the u17 boys Chris and Garry finished 4th and 5th with Grainne Cronin finishing 6thin the girls u16.

Javelin: In the u15 boys Oscar came back again to take another gold followed by gold as well for Andrew Scanlon in the u17 boys and then in the u18s gold and silver for David Scanlon and Josh Fitzgerald.

Long Jump: For the u14 boys Callum Harrington showed the middle-distancers can jump finishing tenth in a large field. For the girls Mia Graham jumped a new PB of 3.47m while Caitlin Hancock claimed bronze with 4.85m. In the u15s the girls of Caoimhe Daly and Olive Burger once again made the final eight. Caoimhe claimed gold with a massive jump of 5.14m. For the boys both Ryan and Michael qualified for Nationals jumping 5.93m and 4.82m to finish first and fourth. I the u17 girls Okwu Backari added to her hurdles gold with a jump of 5.50m joined by Blaithin in 9th and Bavina in 10th. Joining Okwu at the top of the rostrum Matthew Wilkins took gold for the boys with Patrick Corkery in fourth.

Triple Jump: Switching from vaulting to jumping Alex Neff took gold for the u16s. Matthew Wilkins keeps adding to an impressive season taking gold for the u17 boys with Patrick Corkery in second and the hard working Orla O’Sullivan took silver with a jump of 10.74m for the u17 girls.

The Munsters provide another opportunity for our athletes to work more closely as teams and for those who qualified for Nationals from the Counties to get more practice. The u15 girls stormed to a gold medal in 52.34s with the changeovers getting better and better. The u16s sought to exorcise the ghosts from the fall in the Counties taking gold and narrowly missing out on a CBP time. The u14 girls got a chance to practice for Nationals finishing 5th in a very strong field. The u17 and u18 boys also got some time to practice their changeovers taking gold and silver.

So in the end the Leevale Athletes continue to drive each other and push the limits of what they each thought was possible for them as individuals and as a squad. Together they returned to their training groups with 42 gold medals, 22 silver, 17 bronze and importantly nine fourth place finishes. 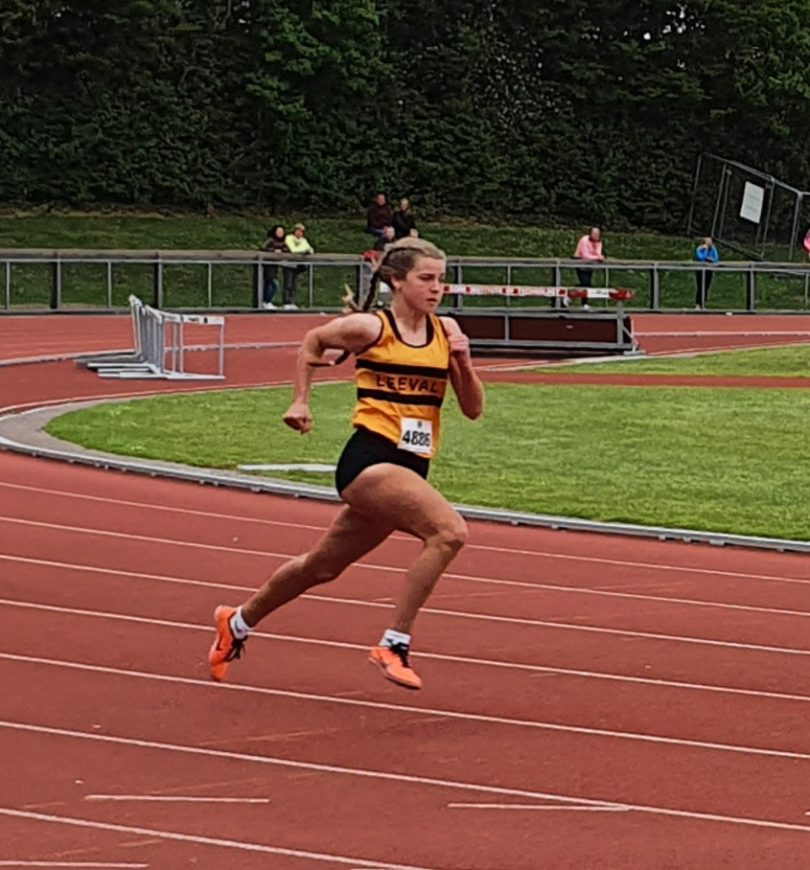 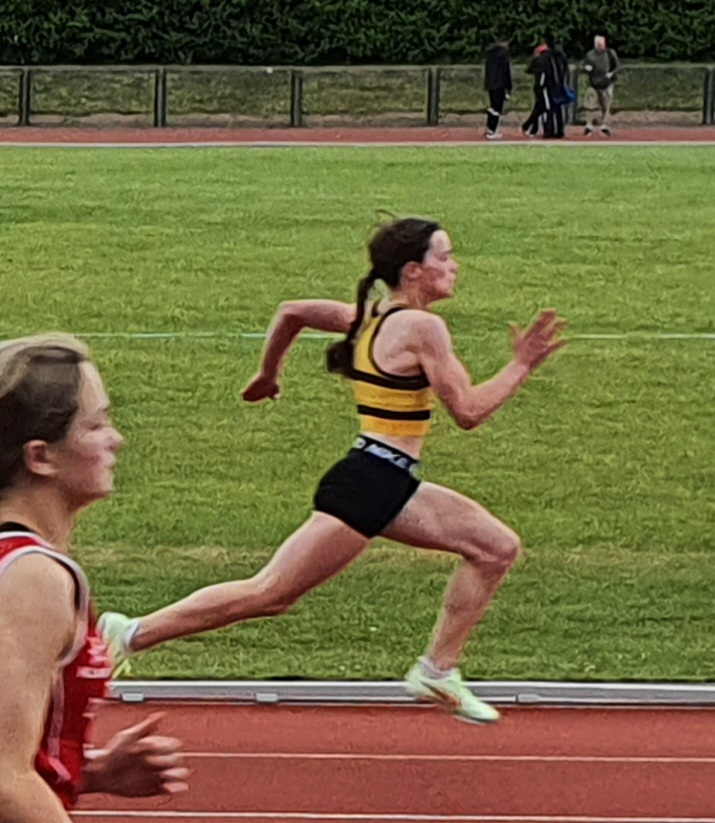 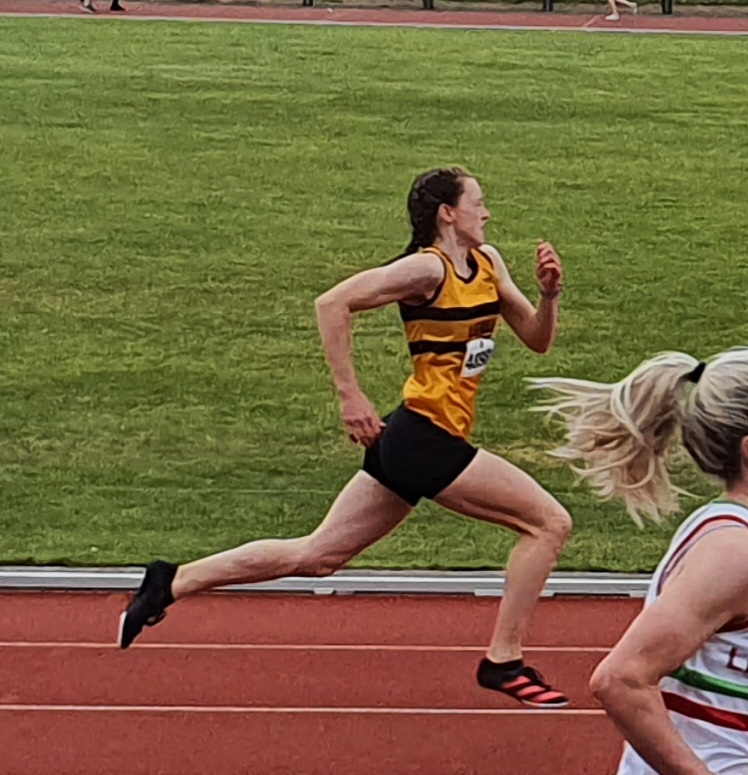 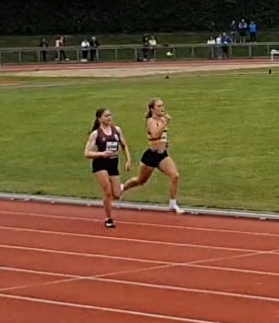 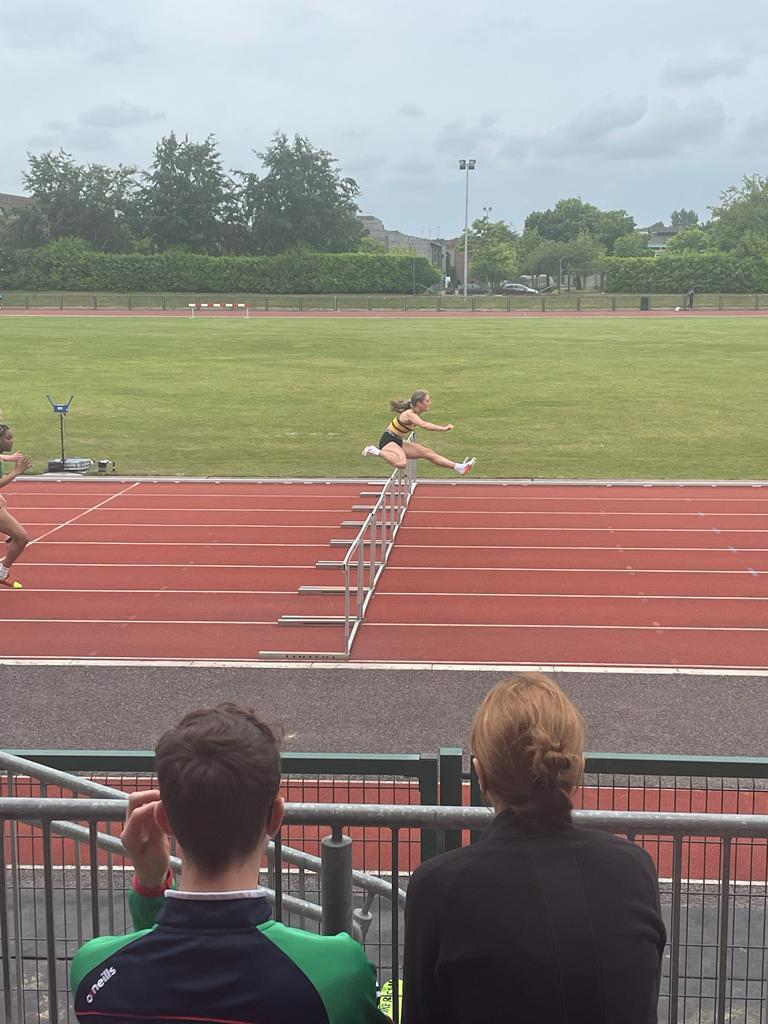 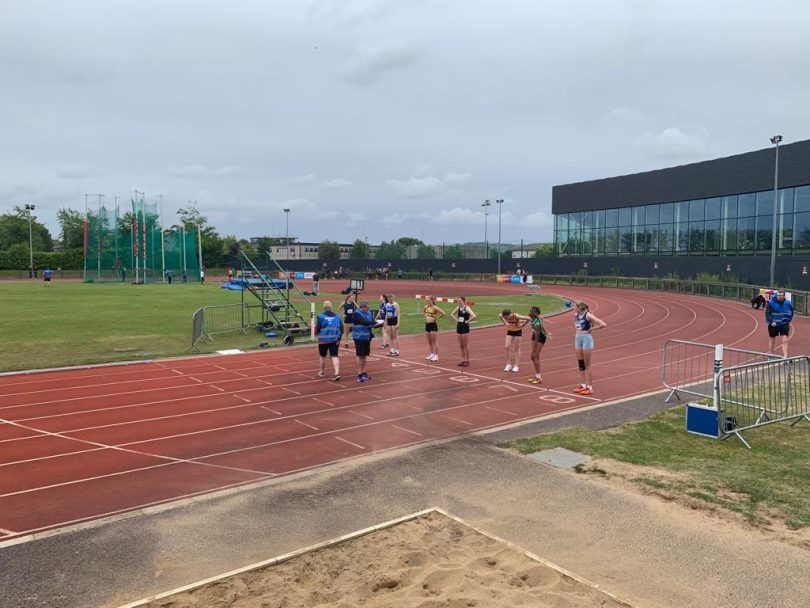 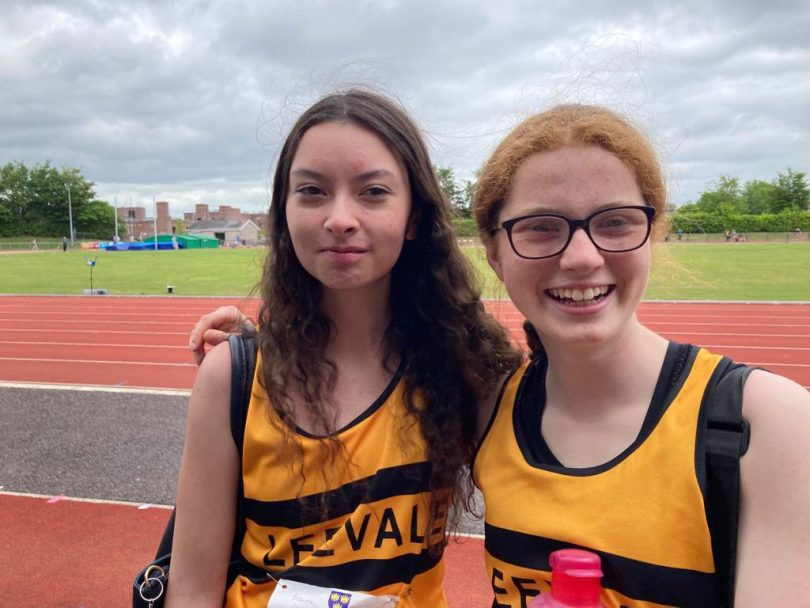 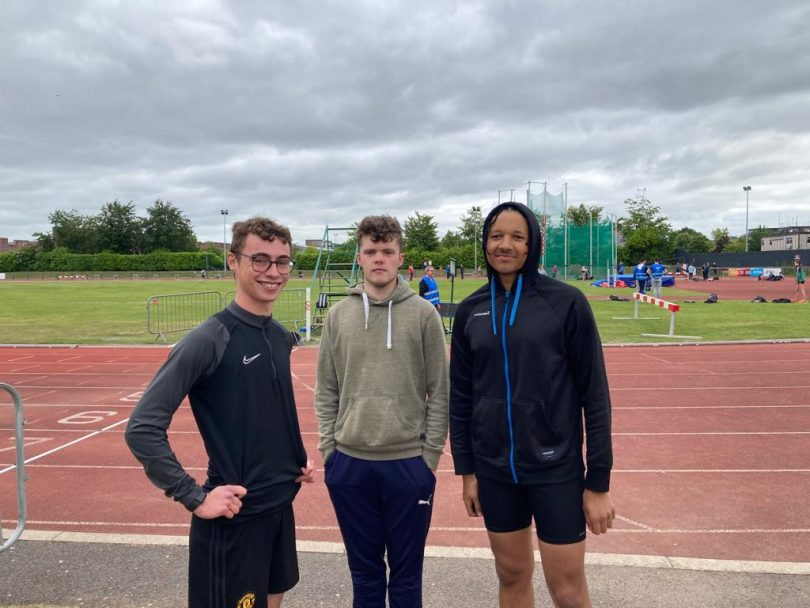 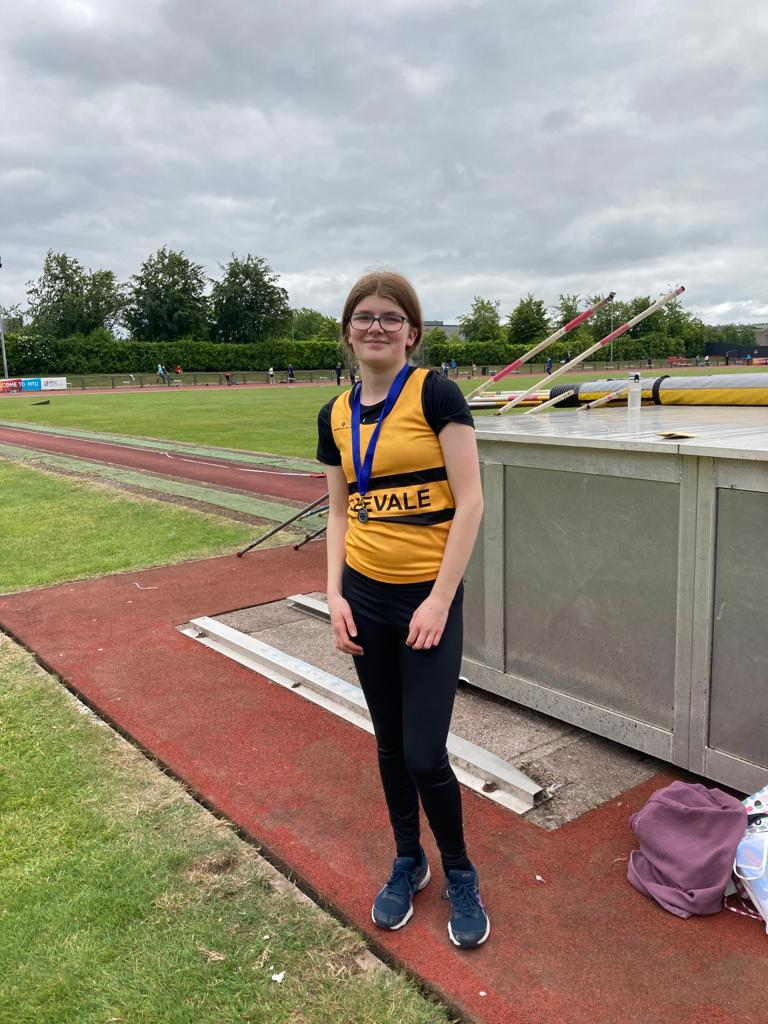 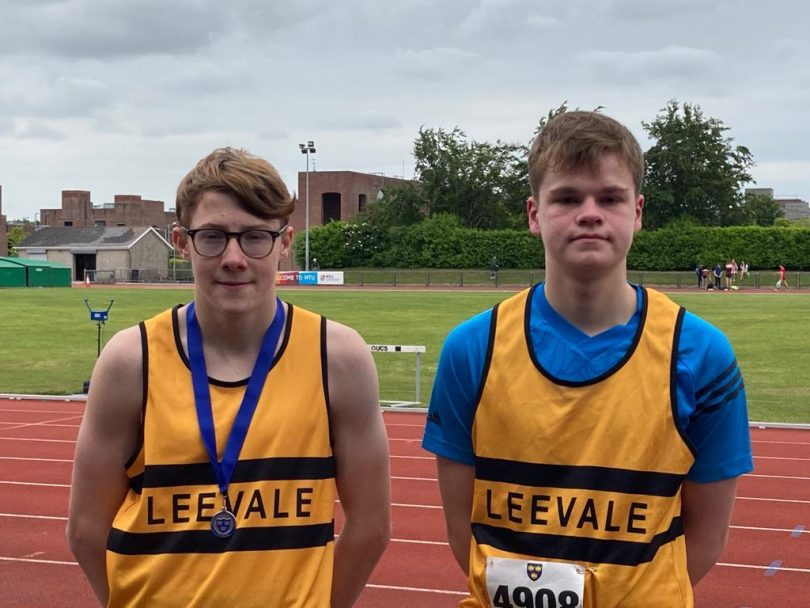 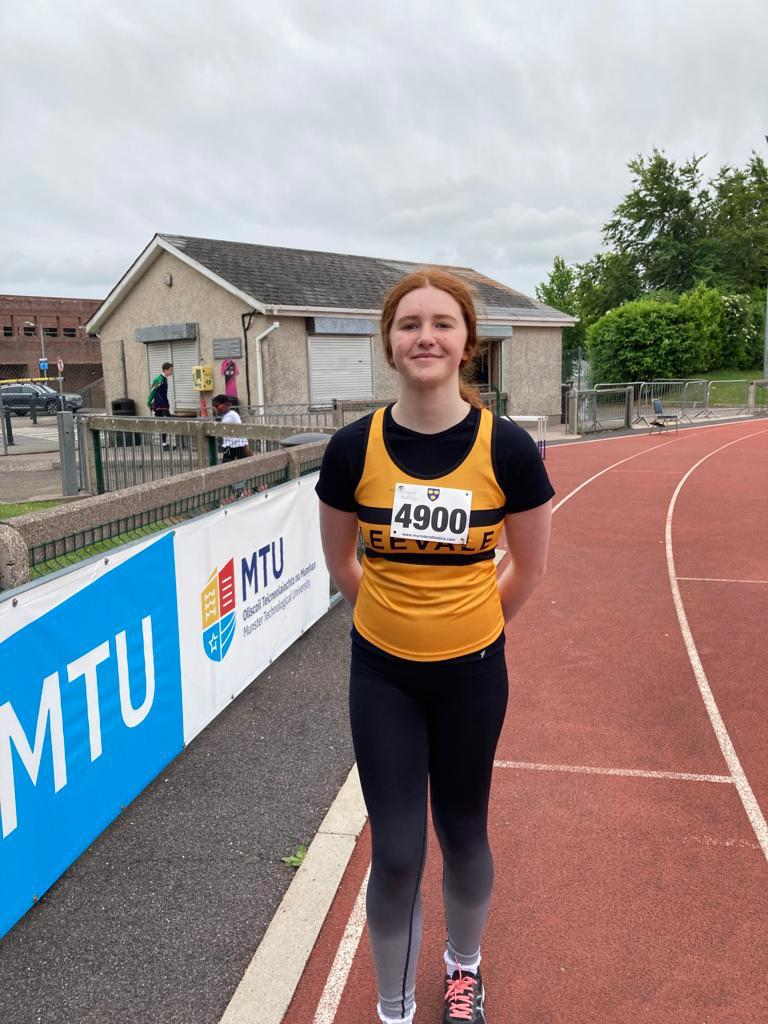 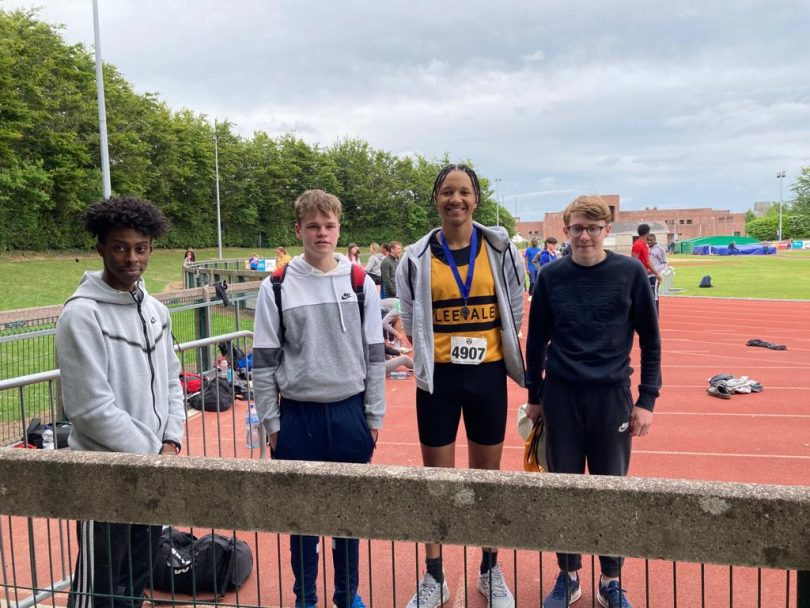 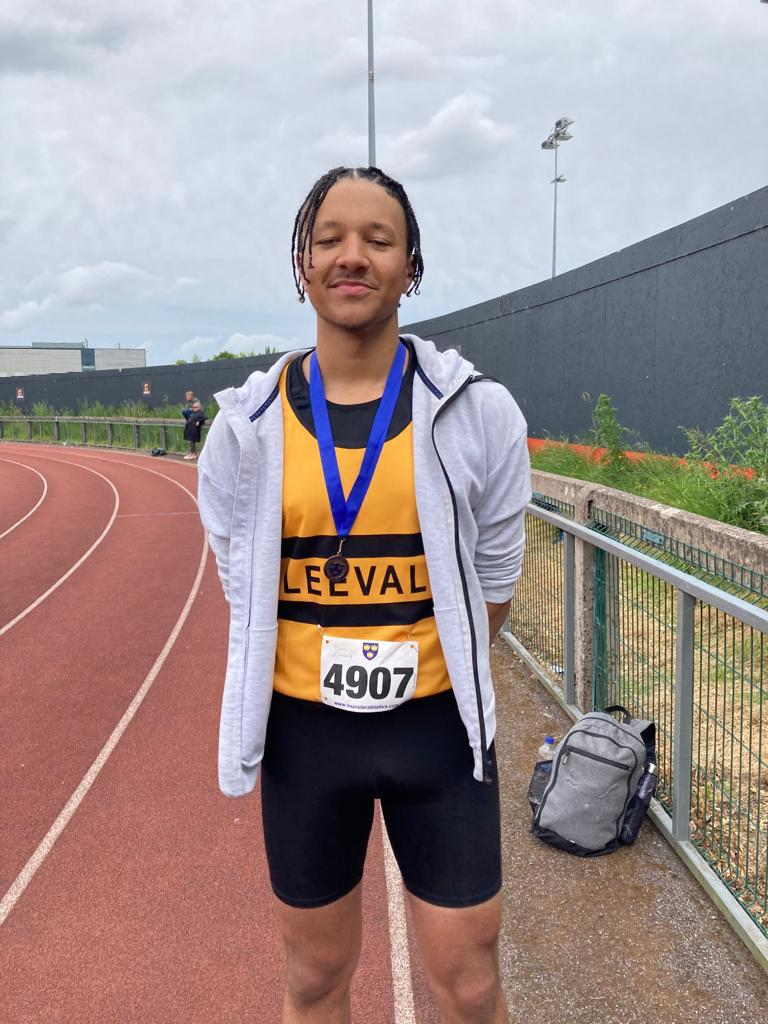 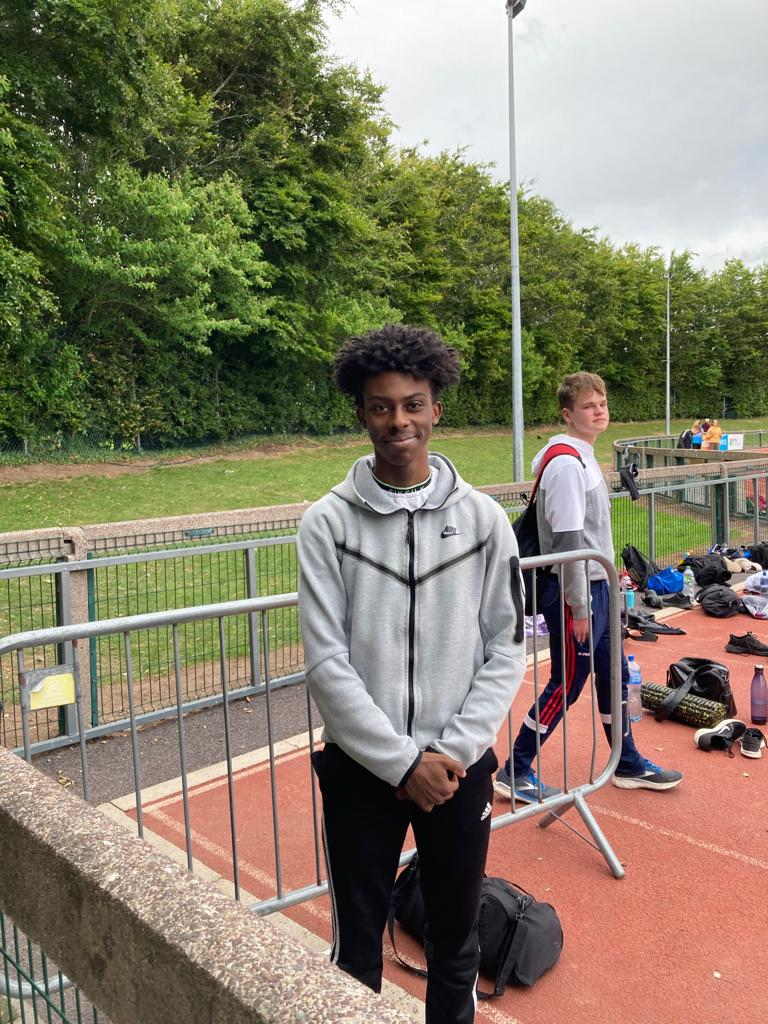 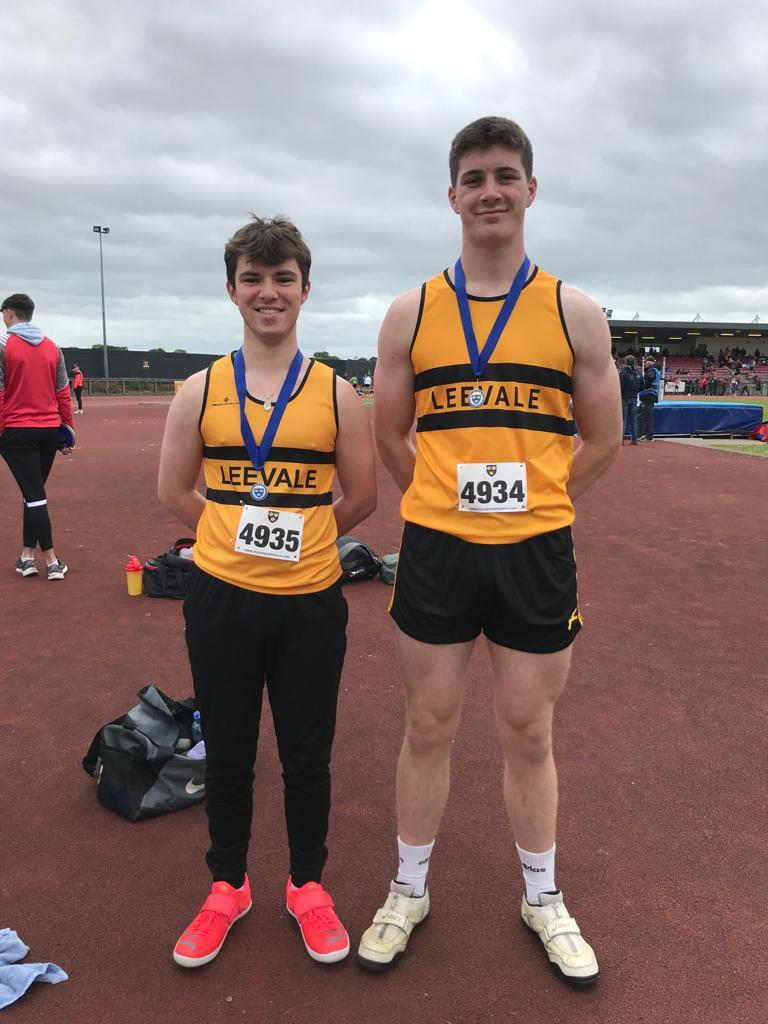 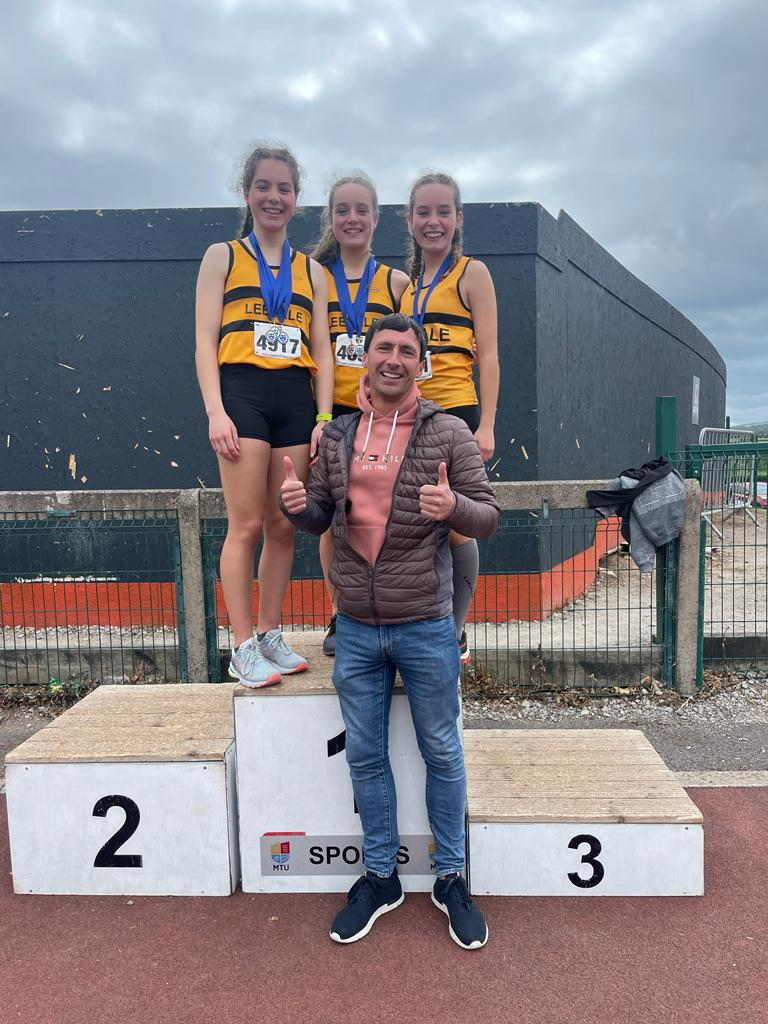 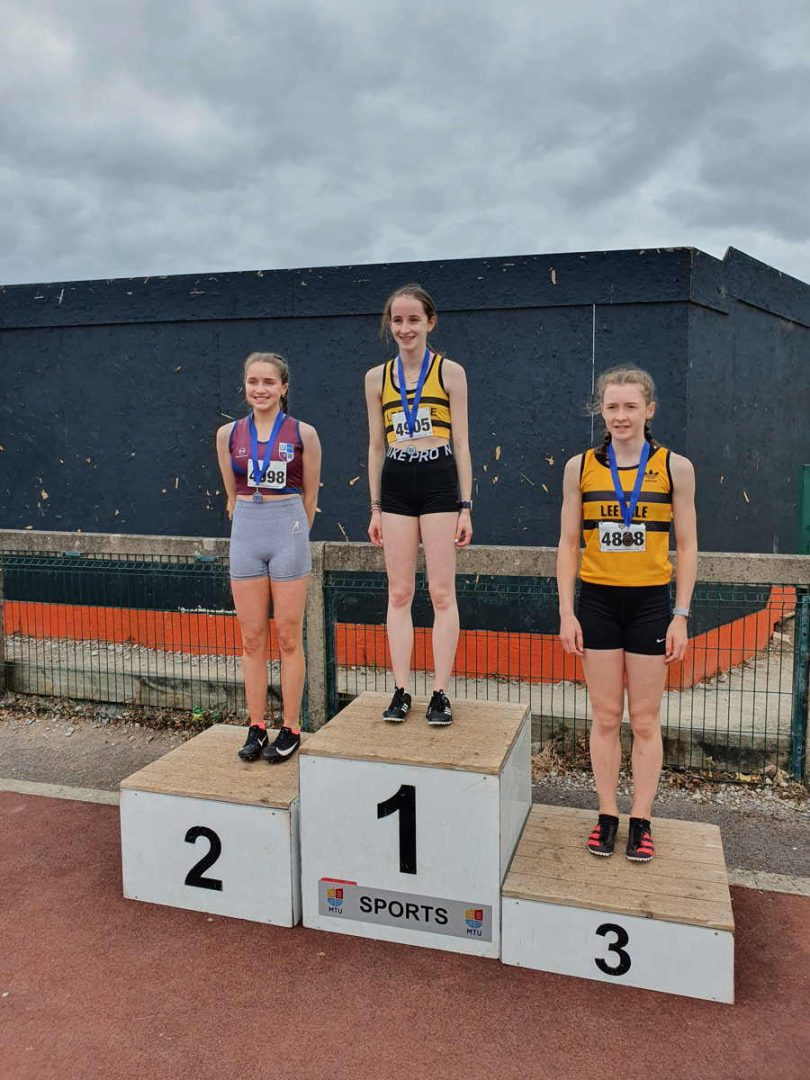 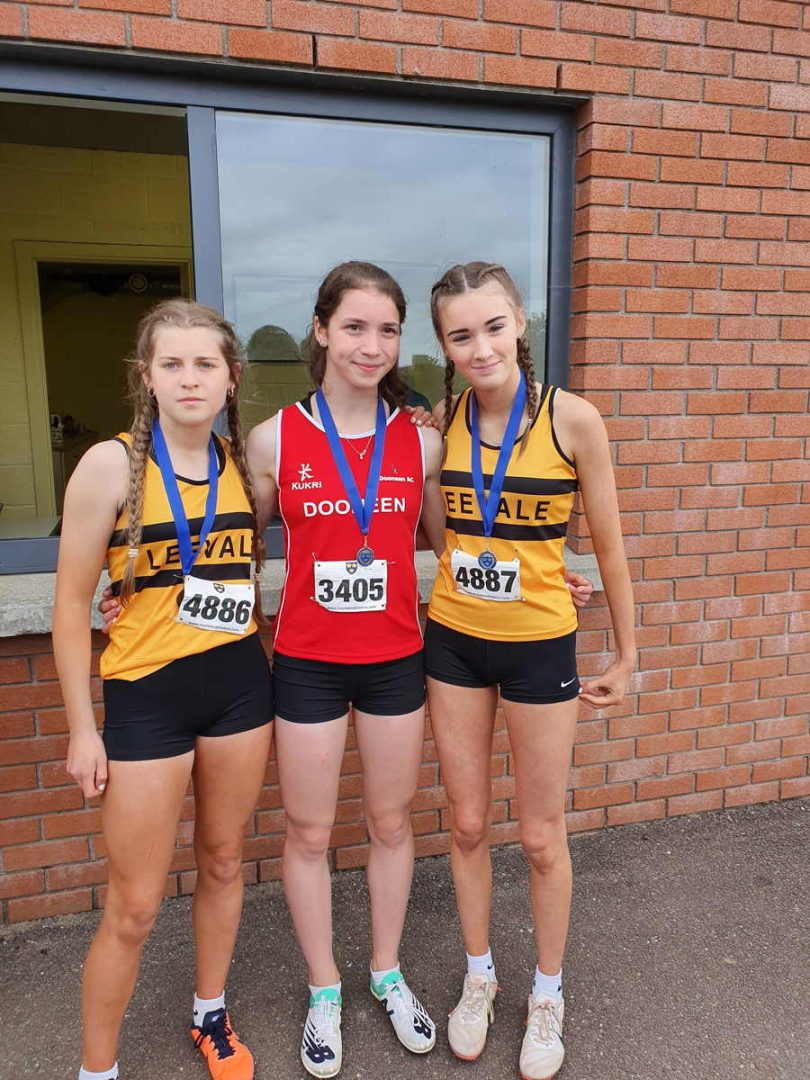 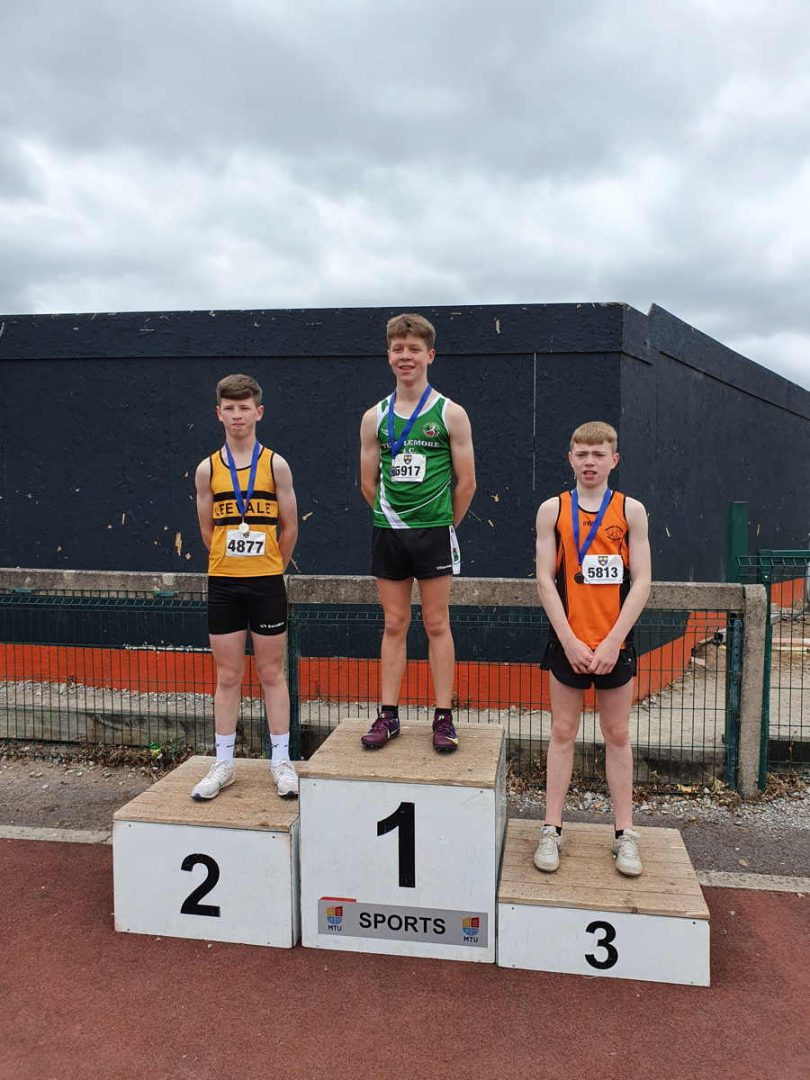