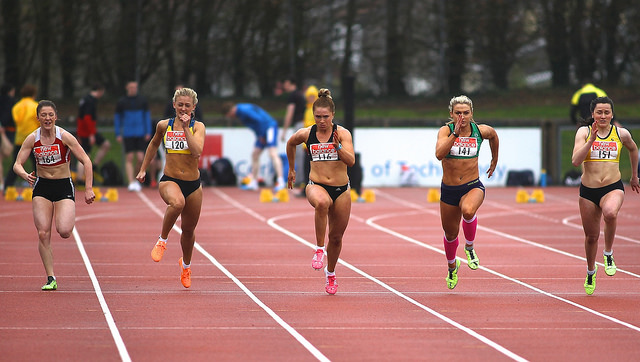 The senior & junior events of Day 1 of Leevale 2014 are now over for another year. The weather was kind and the rain held off until after the last race. Once again athletes travelled in force from all over the country to compete in the Leevale meet. A number of athletes travelled with stated hopes of achieving standards for the upcoming international meets.

The day started on a high when Elizabeth Morland of Cushinstown won the junior women’s 100m hurdles with a time of 14.23 which is inside the EYOT qualification standard.

Sarah Lavin also had a good a day at the office when who on the senior women’s hurdles. She then finished just outside the medals in the 100m to Phil Healy, Kelly Proper and Catherine McManus in a hotly contested final. Lavin turned the tables in the 200m by winning from Proper, Healy & McManus in a time of 24.85, earning her the Female Athlete of the Meet.

David Hynes won a classic 100m men’s final from Marcus Lawler & Keith Doherty, retaking the Bernard Walley trophy which he surrendered to Lawlor last year. Lawler then went on to win the men’s 200m in 21.87, earning him the Male Athlete of the Meet award.

Leevale athletes did the double in the men & women’s 3000m events. Sinead O’Connor pulled away from the field early to win comfortably in 10:12.53. Her teammate Ben Thistlewood ran a strategic race, waiting until 600m from home to kick and pull away from the field to win the 3000m and the inaugural Liam Horgan perpetual trophy. The trophy was presented by Liam’s wife and daughter Cathy and Lynda Horgan.

Louise Shanahan vein of form continued with a win in the women’s 800m.

The great Ken Nason, one of Leevale’s sub 4 minute milers, ran as pacemaker for the men’s 1500m. The race was won by his athletes Conor Walter 1st and Luke Horgan 2nd.