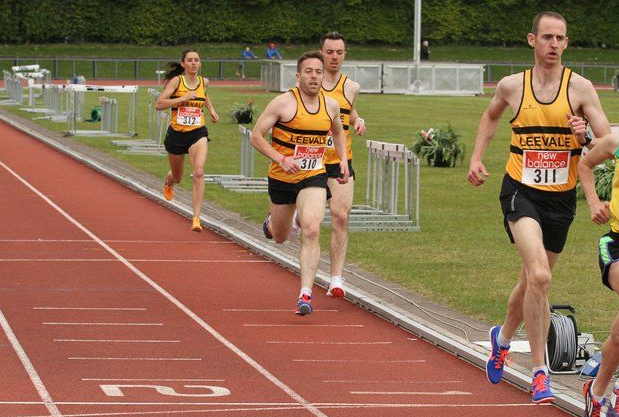 The busy racing schedule continues into early May and there was a good showing from Leevale runners in Midleton last Thursday for the popular 5 mile race. Andrea Bickerdike led the way with a 2nd place finish in the women’s race with 3 of the men also running in the top 10.

On Saturday it was all about track at the 50th anniversary of the Leevale T&F event in CIT. Sinead O’Connor and Niamh Roe took silver and bronze respectively in the women’s 3k while there were plenty of good performances by the men in the 3k with Tim Crowley first home for the club running a 9:31 PB.

Moving into the shorter distances, Phil Crowley took the win in the men’s 1500m while in the men’s 800m, Matt Murnane ran sub 2 minutes to win with Tommy Connolly coming in 2nd. In the women’s 800m, Louise Shanahan was 2nd with Carol Finn not far behind in 3rd.

On Sunday, far away from the track, we had Donal Coakley and John O’Connell tackling the dirt trails of Spain in the questionably measured but undeniably hilly Alfaranate half marathon. Donal took 3rd overall and John 2nd in M35 category. The lads won a well deserved bag of chickpeas each.

Also on Sunday it was back to the roads of Cork in a sunny Bweeng where Leevale once again represented in large numbers. There were 2 races on the day with both Eric Curran and Carol Finn having very strong runs in the 10k making it a double win for Leevale.

In the 5k race, Niamh Roe fresh from her 3k the previous day had a good battle in the women’s emerging victorious while in the men’s race, Tim Twomey narrowly missed out on making it a Leevale clean sweep coming home in 2nd with Conor McCauley just behind in 3rd.

On the same day in Tullamore we had Michelle Kenny taking 2nd place in the 3rd of the 5k race series, just seconds behind Pauline Curley.

This week the main event was in Ringaskiddy on Wednesday for the BHAA Pfizer 6 mile and we had 2 Leevale athletes in the top 5 with Donal Coakley and Brian Hegarty coming in 4th and 5th.