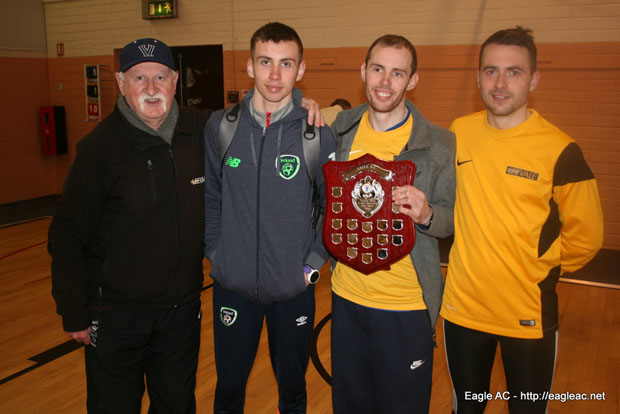 The rugged winter weather continued into February but it didn’t hinder our athletes getting out and hitting the roads around the country (and Spain) with plenty of podium positions and PB’s. The John Treacy Dungarvan 10 miler is always a very popular event for Cork clubs and this year saw 20 Leevale athletes taking on the distance on the first Sunday of the month. There were plenty of good runs and for the first time in club history, the senior men team took home the team title led by Mark Hoey, Andrew Sheehan and Mark Walsh.

On Sunday 11th, following blizzard-like conditions in Little Island, Mark Cronin (20:02) had a good win in the BHAA Jansen 6k with Chris Murphy coming in just behind in 2nd place. On the same day, in possibly warmer conditions in Spain, Lizzie Lee set a PB of 73:23 in the Barcelona half marathon which qualifies her for the world half marathon championships in Valencia in March.

On Sunday February 18th, David Fox and Andrew Sheehan locked horns in Carrigaline for the annual 5 mile race hosted by Eagle AC. Fox took the victory in 26:17 with Andrew just 8 seconds behind in 2nd place and the Leevale men won the overall team prize. In East Cork on the same day, Finbarr O’Dwyer came home 2nd in the Cloyne Commons 4k. In Doneraile on Saturday 24th, Carol Finn won the North Cork 5k race in 18:30 with James Grufferty taking 3rd place in the mens. Finally to round up the racing for the month, Eric Curran had a nice win in the Glanmire Ladies Football 7k with Phil Crowley taking second place.